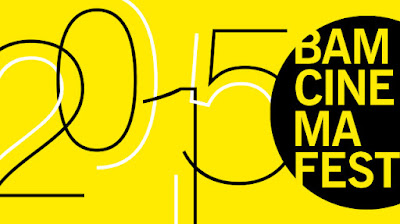 BAMcinema Fest,the Brooklyn Academy of Music's look at new films begins Wednesday for its annual run. One of the more interesting festivals of the year the festival highlights a good number of up coming releases (mostly independent films) and allows audiences to see them under optimal conditions with the filmmakers present.

As always the selection of films is very good with a good number of films that should be on your must see list.

THE END OF THE TOUR is one of my favorite films of 2015. This look at writer David Foster Wallace over the course of a book tour is just wonderful. It may not be one of the best films of 2015 on any level of artistic achievement but its one that I will treasure forever and have playing until I die in my soul. A review is coming July 27th  just before the theatrical release.

THE INVITATION is a messy horror film about a dinner party that is best described as a long drawn out story with a sudden payoff that doesn't warrant the long struggle to get there. I'm not sure that I will ever review the film (the people who have seen a draft have told me I don't dare publish it) so lets just say I really dislike this film intensely and leave it there.

PROPHET'S PREY is Amy Berg's look at Warren Jeffs the head of the Fundamentalist Church of Latter Day Saints, an off shoot of the Mormon's that still practices polygamy. Jeffs seized control of the church when his father died (he probably murdered him to prevent his exposure in a scandal)  which he then turned it into a cult. Jeffs got into trouble with the government when the underage marriages were discovered and a tape of Jeffs having sex with his 12 year old wife surfaced. Its a compelling tale made okay by jumbled editing which doesn't tell us as much as it should. (The book is much better organized)

COUNTING is Jem Cohen's latest and while it has moments, it's mostly going to be for his fans. A Fifteen part film is really short films about what he saw in various places at various times. Some of it works and some of it will put you to sleep (He said the film was influenced by his jet lag and it feels it). This might have been more interesting had he used music as opposed to the actual sound. Still there are moments that stick with you (the woman taking down ads she didn't like being one).  Despite what the director says its damn close to just being a home movie.

RUSSIAN WOODPECKER is the story of Anton who was born at Chernobyl and fled after the disaster. Decades later he investigates a a sound known as a The Russian Woodpecker because the woodpecker like sound on a short wave frequency was coming from a radar display by Chernobyl. This leads to a possible reason for the accident and a look at the trouble in the Ukraine. WTF documentary is a grand conspiracy theory that may or may not amount to anything. The director thinks his subject maybe on to something but at the same time admits he's crazy. I have no idea what to think, its beautiful and mostly compelling, but somewhere in the middle it, like its subject goes off the rails.

STINKING HEAVEN  is a black as tar at the bottom of a collapsed mine during a blackout and lunar eclipse comedy about rehab home in 1990. Everything is fine between the residents until a new arrival comes and destroys the delicate balance and sends everyone spiraling off the straight and narrow. Whether you find this film funny or just tragic will depend on your take of humor that’s right on the line of not being funny. I kind of saw the humor but mostly I saw the pain and found it tough haul since I just didn’t want to be there or with these people and their tragedy (and the score sounds more like a horror film then a comedy). It’s very good if you like this sort of thing otherwise its tough haul.

PERVERT PARK is easily one of the best films at BAMcinema Fest and maybe the year.This look at a trailer park where registered sex offenders live is kick ass. Portrait of a group of men and women who are trying to get by and overcome their past is fantastic. This is good time with good people which reveals a side of life most people never consider, that the offenders are people despite their crimes. We want to keep registered sex offenders away from the people they might harm, but what does that mean? Not just for them but us? This film expertly explores that and other issues-like why outside of the odd place like this park aren’t the offenders getting counseling? A great great film that needs more than the capsule I’m supposed to do. Look for a longer piece when this film hits theaters


For tickets and more details go to the BAMCinefest webpage.
---
With the start of The New York Asian Film Festival less than two weeks away I just wanted to throw out an early warning- coverage is going to to be back end heavy and less complete than in years past.  Normally we'd manage to get coverage of four or five short of the 60 plus films they'd run, however this year it looks like we're going to only get 40 to 44 of the 54 films they are running. Blame it on scheduling (theirs and ours since there are other events happening including Japan Cuts which are running in competition and not in conjunction with NYAFF).  We are going to be in the trenches for many of the days, but some days we are going to miss stuff, even with the addition of Eden to this year's mix.

As for the festival coverage being backend heavy- this is the result of the vast majority of the films they made available to writers being the ones that screen at the end of the festival.  Yes there are a few early titles, but mostly we got to see the stuff in the second half of the festival. For the earlier stuff we'll be in the trenches with you- and even the later stuff as well.

Not to worry we'll provide a cheat sheet for the good stuff we've seen.

But more on that next week.

(And if you still haven't seen what TBA titles are they can be found here)
---
I am beyond words about the passing of Christopher Lee. I will write something extensive when I find them again- his passing must be marked and his life celebrated with carefully chosen words.