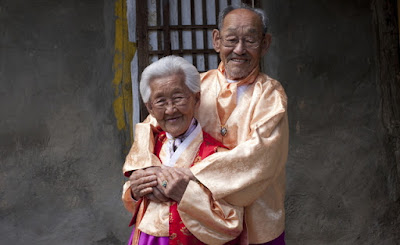 Heart breakingly bittersweet portrait of  a couple married for 76 as they approach their end and still remain wonderfully alive.

The film begins at the end. Its not giving anything away to say that one of them passes away. We know that because the film opens with the wife crying out at her loss. The film then travels back in time and we watch as the couple goes through their daily paces including having a fight with leaves while they are cleaning up their property. From there were watch as the couple express their love, deal with family and cope with the march toward death. Its a sad journey filled with laughter as the couple soldiers through their last days together.

This film filled me with joy and a great deal of sorrow.That two people could live for so long and be so in love with each other gives me a warm and fuzzy feeling. Seeing the couple going through their days made me want to jump on a plane and fly to Korea just to give them a big hug. We should all be so lucky as to find someone that we can spend a day with, never mind decades. That the time they had together had to end is so incredibly sad. I started to well up relatively early and it never really stopped.

You'll forgive my lack of details but I picked the wrong night  to screen the film, the anniversary of  the passing of my mom, when I was already a bit open and raw.Does that mean that my reaction is invalid or questionable, I think not because reflecting back on my experience made me realize how universal the experience is and how truthful the film is.

A must see when it plays on Saturday night.

Addendum:The film is a follow up of sorts to a television documentary called HUMAN CINEMA :GRAY HAIRED LOVERS. The director of this film had seen the earlier film and wanted to know more so he made his own film. 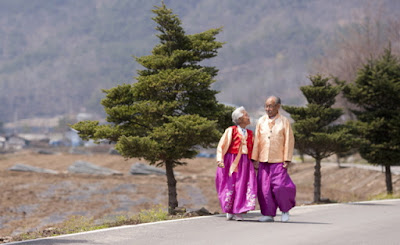