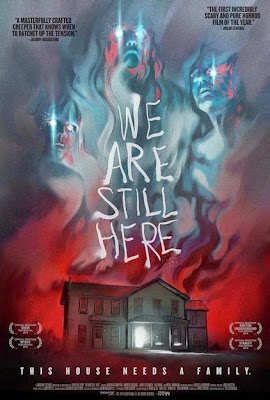 Allow me a moment to say that I know director Ted Geoghagen. I have been encountering Ted for years at The New York Asian Film Festival and with various film projects he has worked on. I feel that I should remind you that the fact that I know Ted has not influenced my feelings for the film

Ted Geoghagen‘s WE ARE STILL HERE is a glorious flashback to a time when horror films were truly scary and not blood soaked endurance test. It’s a film about characters, slowly building tension and making the audience twist in the wind. It’s a film that is rightly rattling modern horror movie audiences simply because they have been force fed horror impostors for so long they either have forgotten or simply never knew what a great horror is.

The plot of the film has Anne Sacchetti and her husband moving into a new house in the country. They have been suffering in the wake of the loss of their son in a tragic accident. It’s hoped that the new house will allow them to move on. The couple is soon visited by their neighbors who are happy they have new people in the area. They tell them it’s a great old house and it needs to have a family living it. They also recount some strange things that have been going on. The strange stories feed into the couples suspicion that perhaps the ghost of their son is with them. It’s not giving anything away to say that there is definitely something in the house…

I’m not going to go into details of the plot, I don’t want to ruin the twists and turns. This is a film that is best savored the first time through not knowing anything. (I should also warn you not to read the interviews that came out of SXSW that were done with cast members until after you see the film. I talked with several writers who were pissed off at a couple of cast members who talked about the twists to such a degree that they any published interview was going to wreck everything). This is a film where the twists and turns sneak up on you and bite you on the ass.

I will say that I love how Ted shot the film. Ted’s camera is not a passive observer rather it sits and moves as if it’s a spirit I the room. All the shot choices within the house have been chosen to mimic where someone who was watching the action and not wanting to be seen would be standing or sitting. There doesn’t appear to be any real use of computer generated images. All of the effects seem to be practical. How he managed to get some of the shadow effects is beyond me.

And watch the shadows- right from the start there is something weird about them- an early shot of Barbara Crampton in the basement looked off because of the shadow until it disappeared…it sent chills down my spine.

A great deal of this film sent chills down my spine.

At this point I’m not sure where to go with this. I have so much to say about the film but I don’t want to wreck things for you. I want so much to talk about all of the films that Ted seems to be riffing on. I want to talk about the twists and why they chill you, but I can't, not yet.

I'll tell you what, why don't you go see this film and in a couple of weeks come back here and we'll talk about it some more. Hopefully between now and then I'll have sat down with Ted Geoghagen and talked to him about the film and I'll have all sorts of good things to report.

Go see the film- it hit theaters and various VOD platforms Friday. Go see it and you'' understand why this film is helping to make 2015 a banner year for Horror films. 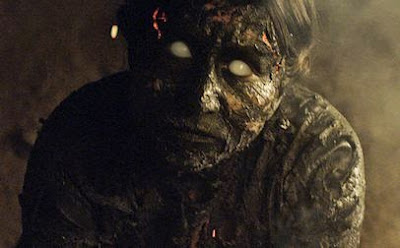