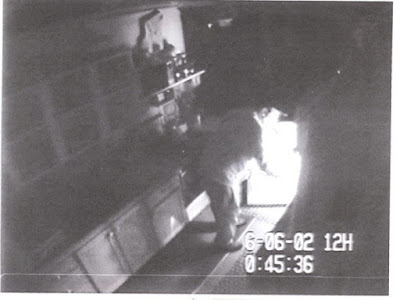 Lena Friedrich's THE HERMIT is a look at the North Pond Hermit. He was a legendary figure in that part of Maine. a man would break into people's houses and steal food and supplies (propane and batteries) when they were away. No one was quite sure what the deal was until hidden cameras caught photos of him and motion detectors finally alerted police where he was.

The man's name was Christopher Knight and one day around the time of the Chernobyl disaster he walked into the woods and pretty much stayed there. His human contact was extremely limited, only an occasional...make that rare passerby. He was truly a hermit.

If you are going to want to hear the man tell his story you're going to be disappointed. Friedrich is more interested in the ripples Knight left in the community. She talks to people who met him, a man who knew where he was, several people who had their homes broken into and lots of members of the community who knew him by his reputation.Outside of the police officer who arrested him this is a portrait of a man by people who don't know him, with the result is an intriguing look at mass psychology- we only know the phantom, not the man.

Friedrich's film is a neat little piece of reporting.As long and as detailed as one could get short of interviewing the man himself, the film drops you into the town and puts you among the towns folk. We really are there and we're told one hell of great story. This is the perfect story for a movie and its perfect story to share when you're shooting the breeze and the way Friedrich tells it all we get both- a movie where great story tellers tell us the story.

TO my wayof thinking this is as good a telling of the story as we are likely to get until and if Knight ever decides t tell hs side of the story. I'm not sure he ever will but if he does I'd like to hope that Lena Friedrich is there to record it.

The film plays at the Brooklyn Film Festival and is absolutely worth the time and effort to go see it.