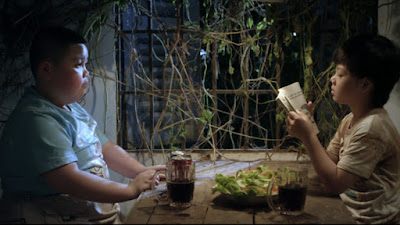 After about six admonishments that this film never happened nor will ever happen the narrative begins. What follows is 65 minutes of ugliness, cruelty and "WTF was that" behavior as people are killed, tortured and eaten by various members of the cast.

While most certainly a punch in the face and a poke in the eye, KFC is one of the least films I've run across at this year's New York Asian Film Festival. An unending stream of loosely connected cruelty I was ready to throw up my hand early on but hung there because the film is so short.

Truly little more than a catalog of bizarre behavior this film never adds up to very much. Sure it provokes a reaction but since its made clear at the start this is not now nor will ever be a mirror of reality what is the point? The publicity material lists it as having something to do with the cycle of violence, I'd rather think it has more to do with the pretentiousness of the director.

I'm sorry there is this point I have to call everyone out on a film and say- guys I've seen more films than you and you're full of shite. I've seen way too many pretentious pieces of trash by first time directors that have been sold to the cinema establishment as works of art to recognize a bad bill of goods when I see one. I've seen even more pretentious pieces of melding of art and horror to know when someone is doesn't know when they've fallen on their face.

This movie is just pain and misery and eye pokes for no good reason.

Rationale aside the bits in KFC are often quite chilling and well done. Taken on their own terms they are masterpieces of horror. The trouble here is that there is nothing meaningful to link them together and since the film insanely thinks it's making a high and mighty point (a fact stressed both in the film and in the publicity material) instead of just delighting gore hounds the film becomes a spectacular failure. (this would have been great if there was no pretense)