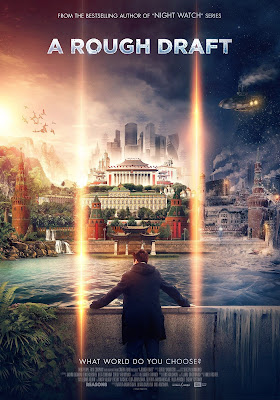 Super video game world designer is forcibly made a gate keeper the door between worlds. However things become complicated as he tries to return to his world and some people try to kill him.

Weird Russian science fiction film never quite finds its footing as it zips through set pieces that are beautifully done but which never quite hang together.

More disappointing than bad, A ROUGH DRAFT remind one of other better films (Matrix), and even some lesser ones as well with it's notion of a tower between worlds. In a weird way I kept waiting for some of Michael Moorcock's heroes to come waltzing through this version of the tower at the center of it all.

While the story never thrills the visual effects and action sequences do and they keep you watching even when all else fails.

I'm glad I saw it but looking back it wasn't something I needed to go out of my way to see.
Posted by Steve Kopian at July 31, 2018