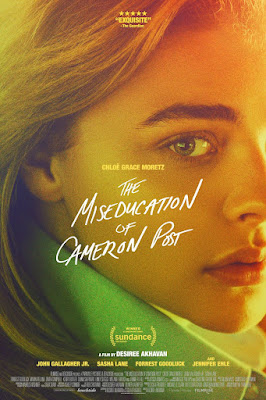 Cameron is caught having sex with her girlfriend at the Homecoming Dance in 1993. Everyone is freaked out and sent off to a faith based school where her same sex desires are to be combated.

Very good drama with a comic edge looks at the the whole notion of programs that are suppose to readjust sexual orientation so god will love us. Its a film that is nicely low key and will give anyone on any sort of belief scale something to think about.

I have no idea what god's thoughts on the whole matter are, but it's clear the filmmakers have a sympathetic eye toward the people forced to endure treatments that are at best quackery and at worst abuse. No one is cliche or smart ass in tone, unless it comes out as part of a real character. We care for the kids and we accept that some of them really do want to change. Best of all while decidedly not in favor of the treatment, the film doesn't give us monsters to hate. The counselors are caring. They really do want to do what they think is god's work. We get the sense that they really think they are helping until it's clear they aren't.

One of the better films of 2018 THE MISEDUCATION OF CAMERON POST is recommended
Posted by Steve Kopian at July 30, 2018