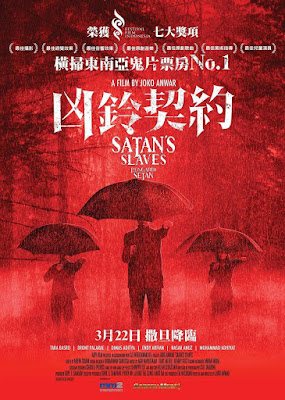 It could be the Indonesian Hereditary—and it’s a remake, so there really isn’t much new under the sun. That doesn’t mean it isn’t scary as Hell though. After three years of bedridden decline, Rini Suwono’s mother is finally gone. Or is she? She was always difficult, but she takes it to all new heights (or lows) when she starts haunting her family. It seems to be all part of her satanic death cult’s plan in Joko Anwar’s Satan’s Slaves  which screens during this year’s Fantasia.

Mawarni Suwono was once a popular local folk singer, whose eerie ballads had a vibe not unlike the string-heavy Judy Collins’ rendition of “Both Sides Now” that happens to play over Hereditary’s closing credits. Of course, her old records label just throws crumbs to her family, so they are in rather desperate financial straits. In fact, the nameless father will leave looking for work shortly after the funeral.

As a result, Rini will have to face the initial rounds of terror and tragedy on her own, including the death of her paternal grandmother. That just leaves her and her younger brothers: the surprisingly helpful sixteen-year-old Tony, the bratty ten-year-old Bondi, and the mute nearly seven-year-old Ian, who will become the primary focus of most of the supernatural and sinister attention. Rather tellingly, none of the siblings look alike, presumably because they were each the product of unions with different cult members.

So yes, things are bad, but they will get steadily worse. Hereditary really is a fitting comparison film for Satan’s Slaves, which incorporates elements of James Wan haunted house movies, demonic horror, and killer cults. The milieu of isolated rural poverty and Islamic traditionalism heightens the atmosphere of hopeless dread (it might be politically incorrect to say it, but the truth is Catholics and Buddhists have the best exorcists). The early 1980s period details are all spot-on and the music, most particularly Suwono’s old records, burrows under your skin like a tick.

Tara Basro solidly anchors the film as Rini, but some of the best work comes from her younger co-stars, especially Nasar Annuz and M. Adhiyat, who are completely believable as Bondi and Ian, even when placed in some wildly freaky circumstances. As a bonus, Egy Fedly cranks up the attitude and eccentricity as Budiman, who was once a close friend of Rini’s grandmother, before becoming a paranoid Fortean researcher.

Frankly, Anwar is probably the most under-appreciated genre master working in cinema today. He has a masterful command of mood, pacing, and fear that builds over time. Despite, or maybe because of its thematic similarities with Hereditary, Satan’s Slaves could very well be the film that will take him to higher levels of international awareness and distribution. Very highly recommended.
Posted by Steve Kopian at July 18, 2018