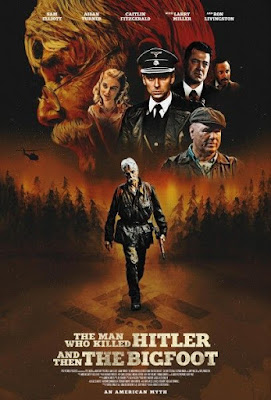 My number one must see at Fantasia has become one of the biggest head scratchers of the year. While not bad it is not what I expected...and that's good and bad...

Forget what you think this film is, it isn't that. It is not really any sort of exploitation film but an often oddly serious character study about a patriot getting older and sent to do one more job. The man is Calvin Barr, played by Sam Elliot in an award worthy performance. It's 1987 and Barr is living alone going through the motions, still trying to come to terms with all that he's done and lost, particularly his killing of Hitler, which as covered up and didn't end the war.  Then the FBI and Royal Canadian Mountie show up and ask him to come back and kill Bigfoot. It seems it is infected with a terrible virus and will wipe out the world.

It sounds loopy but the film is largely played straight. For anyone expecting a genre film you're going to be disappointed...pretty much until several moments in the second half when the crazy genre bug pops in. The fact the film is played so seriously is going to confuse people the first time through. Frankly I don't know what I think. I'm not sure if I'm mixed on the film because it is so odd or because my expectations have been shattered.

I know the shifts into silliness wobble the film. Carr's alias in German has the initials USA. There is a jokey feel to his going up to kill Hitler, which turns deadly serious once he does it. The Bigfoot vomit scene is played for laughs and works against the seriousness of the situation and the fact that Carr doesn't want to kill anyone. There are other moments the hobble the over all serious film.

I honestly don't know what to think. Actually I'm going to have to ponder this film a while and then see it again.

For the short term I like the film. I love Sam Elliott's performance. The rest I'll get back to you about.

The Fantasia screening is done. The film will be heading to a limited theatrical and VOD release
Posted by Steve Kopian at July 20, 2018