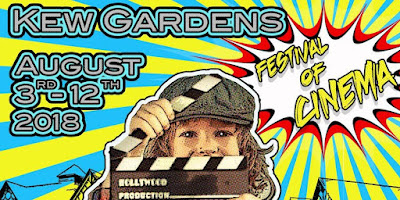 The second annual Kew Gardens Festival of Cinema starts this week and it looks to be a blast. Taking place in Kew Gardens proper and at the Queens Museum the festival is 10 days of cinematic goodies that has something to delight everyone. Go here and look things over and buy some tickets.

Okay, full disclosure as this posts I have not waded into this festival as I have with other recent ones, because I have been covering four other festivals and I am just really beginning to put my coverage together (hence the brevity of this curtain raiser). As a result I can’t really list all of the goodies as I have with other recent festivals. However I can make a few suggestions:

US, FOREVER AGO - I am in love with this film. A narrative/documentary hybrid the film becomes something else entirely. Heralding the arrival of Irina Varina it blew my mind and then some. One of the best films of the festival and maybe 2018. Highly recommended.

MURDER MADE EASY is an absolute blast of a film. It begins with a dinner among friends and then turns deadly. I saw this earlier this year and I have been recommending it ever since. A great great film one of the best films you'll see all year.

THE DOCTOR’S CASE – a solid Sherlock Holmes tale based upon a Stephen King Story. Not a monster story but a solid mystery

INTO THE VALLI is a heavy drama about a Frankie Valli impersonator whose personal life begins to crumble. Its a killer.

CHASING SUNSHINE is a sweet comedy that you have to see at the festival. An amusing tale of two friends on a scavenger hunt so one can find secret admirer, it is probably going to get lost once off the festival circuit because it’s brief run time is going to keep it off many people’s radar. That shouldn’t happen because it’s a lovely film. See it and then then help spread the word.

A VIOLENT MAN - excellent boxing film noir updated to the world of MMA has a fighter, who laid out the champ in a sparring match, chief suspect in a murder. A great cast and a solid script make this one to see. One of the very best films at the festival

Those are just some of the films playing, there are plenty more so go buy tickets and see something. The festival website is can be found here.
Posted by Steve Kopian at July 29, 2018