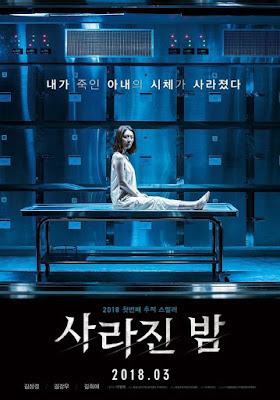 THE VANISHED is a twisty turny supernatural tinged crime thriller about a dead body that gets up from the slab in the morgue and walks off. This sets in motion a police investigation…and to say more might be telling.

The less you know the better this is going to play. I say this because in reading on the film in the Fantasia material I read comparisons to various classic thrillers (I won’t say which ones) which kind of took the edge off the WTF nature of some of the twists. Knowing too much made this slightly less thrilling. I should also point out that the film is a remake of a Spanish film called THE BODY so if you saw that film you may know what to expect here. (Not having seen the earlier film I don’t know how they compare).

I will say that is an expertly made film. Everything about it is as good as it gets. I love that the pithy dialog is delivered by an expert cast. I also love the look of the film. There are numerous shots and sequences that not only added emotion to the proceedings but delighted my inner film geek (the underwater shot where the red lighting looks like blood may be one of my favorite shots of all time).

Simply put VANISHED is a great little thriller and worth a look.
Posted by Steve Kopian at July 18, 2018