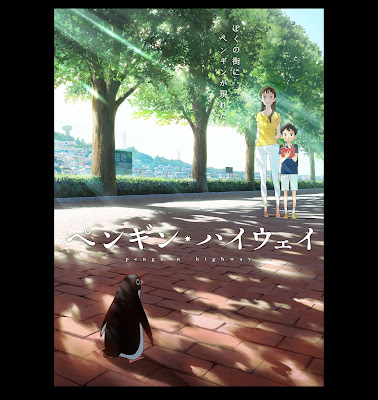 How you take PENGUIN HIGHWAY will depend upon how you take Aoyama, the 4th grader at the center. A super smart kid he knows he is going to be great and he knows he will marry the mysterious young woman who works at his dentist's office. What he doesn't know is why there is a flock of penguins in the middle of his tiny town. He is a cock sure kid that made me want to beat the snot out of him.

Yea he's a sweet kid, but he is a real twit. He is kind of like Sheldon from THE BIG BANG THEORY, annoying as all piss which is the reason I avoid the show. He is exactly like a bunch of really smart kids I knew growing up, all of whom I wanted to smack sense into. The fact that I didn't like Aoyama meant that I had a difficult time with the twists and turns involving the rest of the film.

Filled with some wonderful idea, some beautifully rendered sequence and a haunting score PENGUIN HIGHWAY should be a home run but it never really worked for me. It's not just that I didn't like the main character, it is more the fact that the film wants to be more clever than it is. Its trying to be wondrous and instead it is just okay. Yea, the bits look great (I love the penguin hordes), but the story never really works.(And I'm not going to be specific because much of this film is a mystery and the fun is seeing where it goes.)

One of the rare disappointments at this years Fantasia. ( then again of you love characters like Sheldon on BIG BANG you'll probably eat this up)
Posted by Steve Kopian at July 29, 2018