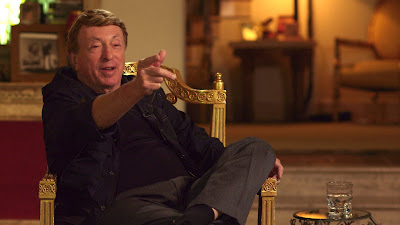 If you love movies then you must see KING COHEN a loving, often very funny, portrait of filmmaker Larry Cohen, as told by the man himself and the people he worked with. It is a glorious celebration of a man, his movies and the industry he loves.

Cohen got his start in the golden age of TV writing for various shows being done live in New York. He then moved on to creating shows (BRANDED, THE INVADERS) before moving into feature films (BLACK CAESAR, THE STUFF,ITS ALIVE, Q, CELLULAR, PHONE BOOTH). He is a respected filmmaker who has carved out a niche for himself and still manages to throw scripts toward big budgeted Hollywood.

What is wonderful about the film is the steady stream of stories about the making of his films and the occasional counterpoints between Cohen and his actors. For example Cohen and Fred Williamson have differing remembrances about how the scene in BLACK CAESAR where Williamson jumps from a cab was shot. Other stories include his pushing of ITS ALIVE over a three year period to make Warner release it correctly. His persistence resulted in a major hit and the unforgettable ad campaign that result (There is only one thing wrong with the Davis baby....Its Alive). There are so many stories your face will ache from smiling. And trust me even if you aren't a huge fan of Cohen's films you'll want to see this because the stories are just so damn good.

I had a blast. This very well could be one of the most fun films of the year.

An absolute must for anyone who loves the movies or great films.
Posted by Steve Kopian at July 23, 2018