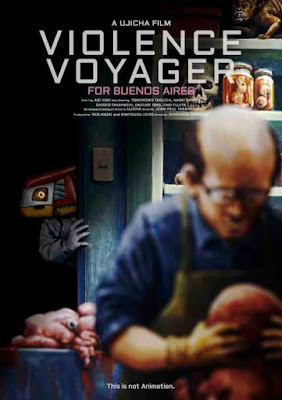 Experimental animator Ujicha’s Violence Voyager feels like nothing so much as a modern update on the boom of hyper-violent, hyper-nihilistic Original Video Animations (OVAs) that flooded the Japanese anime market in the late 80s and early 90s: mean, vicious titles low in sense but high in blood, sex, and human cruelty; the kind of poorly dubbed shlock like Osamu Kamijo’s Violence Jack and Ichirō Itano’s Angel Cop that made Central Park Media and Manga Entertainment industry titans stateside and doomed anime’s reputation as gory porn cartoons for almost two decades. The only difference is these shows tended to involve full-grown adults (usually in futuristic and/or post-apocalyptic settings) and the occasional high schooler.

But the depraved tortures and killings in Violence Voyager are saved almost exclusively for little children, usually naked ones cowering in fear. It follows the fate of two young boys, the brave American Bobby and his cowardly friend Akkun, as they come across the eponymous amusement park on the side of a nondescript mountain. At first it seems like a gigantic water-gun tag attraction where guests must blast Googie robots, but they soon discover a small tribe of lost children fighting for their lives. Turns out the robots are metamorphosed monstrosities made from kidnapped kiddies by a mad scientist intent on creating a new race of organic/mechanical life who also just so happens to have a Lovecraftian/Cronenbergian behemoth locked in his basement laboratory. And those Googie robots? They aren’t armed with water guns like the ones given to Bobby and Akkun—they’re equipped with corrosive acid sprayers that can melt good little boys and girls into screeching skeletons of bubbling flesh in seconds. One by one the children get picked off as Bobby tries to save them all and defeat the dastardly doctor before it’s too late.

Much beleaguered credit must be given to Ujicha’s art style, a unique blend of animation stills and live action puppets he calls “geki-mation.” Of course, if I was feeling particularly grouchy—from, say, sitting through 80+ minutes of child murder—I might point out that almost the exact same technique was used more brilliantly in Sean Meredith’s superb Dante’s Inferno (2007), a film which conspicuously lacks terrified prepubescents getting turned to hamburger meat, and any given number of Monty Python’s Flying Circus shorts. Some might be able to stomach the story for the sake of the art, but I can’t emphasize this enough: child killing is not my definition of a good time. And I’m suspicious of anyone for whom it is.