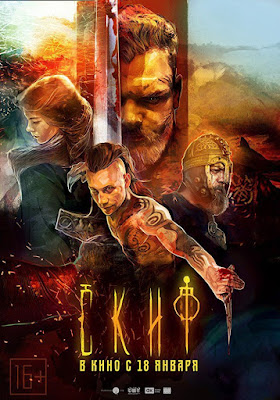 Lutobor is a good soldier who has the misfortune of surviving an attack by a group of Scythians hired to kidnap his wife. Ending up caught up in the political games of his lord, he is allowed to escape to find his wife. Taking Marten, a captured Scythian with him, he heads off to get his wife and child back.

Bleak, black, bloody and bruising  THE SCYTHIAN is cinematic brick to the head.  A violent slice of life on the Russian steppes of several centuries ago, it is a land where the strong survive and no one is safe. This is a film filled with violence and death in truly ugly and realistic ways.

There is a great deal going on here and it makes for a rich little film. The forward thrust of the film is a save the family revenge thriller but at the same time the film expands that to include political intrigue and the changing of the gods. Not only are we off balance because of all the violence, we quickly realize that all sorts of games are afoot as well. There is no safe place and no one we can trust.

One of the things that I love is the film does not behave as you think it will. Trust me on this there are twists and turns that I never saw coming. And then there was a point where I thought we were in the home stretch and I realized that there was still a long way to go. I wondered how it could fill the time only to discover it could do so easily/

And in a way that is one of the small flaws in the film. There is a great deal going on. At some point around the half way point I realized I kind of lost any sense of who some people were.I knew the main characters by sight but the names of people and peoples were lost. I could follow what was going on but I suspect I was missing something. I suspect I will like it ore the second time through

Then again I alternately want to see this film again and I never want to see it again. Undoubtedly a truly great historical action film, it is also a great deal to take in. From the copious amounts of blood and violence to the politics, this is a film that feels more is more, with the result that by the end we feel beaten up. Unlike most other films these days you will want to take a break after you see this.

Reservations and audience abuse aside I love this film. It is a unique and one of a kind film that rattled my cage and made me sit up and take notice. It is one of the best films at Fantasia as well as one of the truly notable films I've seen in 2018.

Highly recommended for anyone who can take the realistic gore and blood.

ADDENDUM:
The SCYTHIAN will release in the US on August 14th under the title THE LAST WARRIOR on VOD, BLURAY and DVD 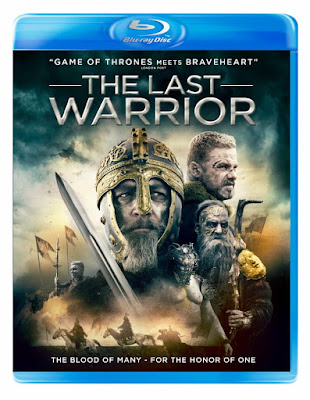