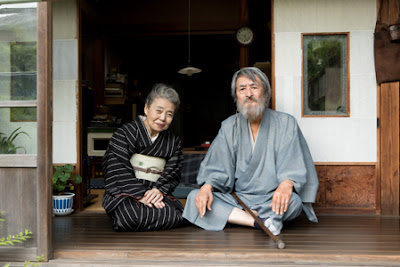 In his Great Movies review for Wim Wenders’ Wings of Desire (1988), Roger Ebert explained that the film is “like music or a landscape: It clears a space in my mind.” Watching Shûichi Okita’s Mori, the Artist’s Habitat, I felt the same mental emptying, the same translucent quieting of my subconscious until nothing remained but the stillness on screen.

I say stillness not in the traditional sense of stasis, but in the Daoist sense where one casts off the cares and obsessions of material life and exists totally within the moment, totally in the now, totally in communion with the Dao that Cannot Be Dao’ed. Mori, the Artist’s Habitat has no real plot, no real causative narrative.

Things may happen, but nothing actually Happens: it is simply a day in the life of Morikazu Kumagai (1880-1977), beloved Japanese painter known for his bright colors and simplistic compositions of animals and nature. Morikazu spent the last several decades of his life never leaving his sixty square meter house and garden, receiving visitors with his long-suffering wife Hideko and silently observing the insects and animals in his backyard. He’d spend hours on his stomach watching columns of ants, hours on his bottom contemplating a strange stone, hours on his back staring at the empty sky, pausing only to coo a local cat, slurp a bowl of noodles, or ignore unwanted guests. (The film’s biggest laugh comes when Morikazu nonchalantly brushes off a call from the Japanese government offering him the Emperor’s Order of Culture award, reasoning that accepting it would bring even more visitors.)

The conflict—if one could call it that—comes when a developer of a nearby condo that would block the sun from their garden demands that Hideko and Morikazu take down a series of posters put up by their fans protesting the construction. But even this is downplayed, ultimately leading to a tender scene with the developer’s assistant where Morikazu assesses a painting by his son. He calls it trash, but important trash, for it’s art and the pursuit of art is itself a worthy and noble undertaking regardless of whether or not the artist has talent.

Mori, the Artist’s Habitat similarly interrogates the validity of Morikazu’s cloistered life: can such an existence have meaning or importance? To which the answer is simply yes—its mere existence is its own validation. For Morikazu is. He awakens and eats, he naps and watches. Sometimes he paints, but more often he doesn’t. For his is a life in perfect harmony with the Daoist concept of wu wei (無爲): non-action. By having no pretensions, he has no worries. By having no desires, he has no self-destructive cravings. By living in the eternal now, he settles into the very rhythm of the cosmos.

Near the end of the film, he asks his wife if she could relive their lives the same way all over again, would she. She scoffs and says no. She’s too tired. But Morikazu? He’d be content living the same life over and over again for the rest of eternity. And who could blame him?

MORI THE ARTISTS HABITAT plays tonight at the Japan Society. The screening is sold out however there maybe standby tickets at the door. For more information go here.
Posted by Steve Kopian at July 26, 2018