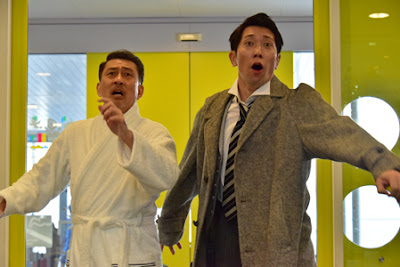 Heist movies are always the most fun when they’re about a bunch of bastards ripping off a group of even bigger bastards. I’m not talking about a film’s inherent quality or importance within the genre itself, I’m talking about flat-out, slam-dunk fun. It’s just not as satisfying to watch a group of clever crooks steal from faceless corporate entities (e.g. Logan Lucky) or super-wealthy aristocrats who honestly won’t miss a measly few million (e.g. Ocean’s 8).

This is what Masaharu Take’s We Make Antiques! intuitively understands, giving its crooked heroes a pair of even more crooked villains to outfox: smug and slimy antiques appraiser Seiichiro Takahashi (Masaomi Kondo) and dealer Tadayasu Hiwatashi (Kogan Ashiya). To whit, it’s a joy to watch unscrupulous dealer Norio (Kiichi Nakai) and expert pottery forger Sasuke (Kuranosuke Sasaki) join forces to trick them into buying a counterfeit tea bowl which ostensibly belonged to the sixteenth century tea ceremony master Sen no Rikyū. After a charming first act where they con each other—Sasuke tricks Norio into buying a closet of fake antiques which Norio tricks Sasuke into selling for bargain bin prices—they unite in their common animosity towards Takahashi and Hiwatashi.

Some might argue that this counterfeiting scheme may not constitute an authentic heist. But the story beats are exactly the same: the thieves meet up, identify a target, plan a job, assemble a crew, execute said job while countering complications, and evade the authorities. (The supporting cast of ne’er-do-wells is particularly delightful, especially a suspiciously nonchalant sushi chef who moonlights as a forger and an ancient xylophagic paper maker.) The best sequences involve the actual construction of the forgery, beginning with Sasuke tasting samples of clay to get the right kind—you apparently want slimy, sour clay for older pieces—and ending with Norio sweet talking Takahashi and Hiwatashi during a public auction.

The one problem many audiences might have is the more casual tone and pacing of the film. Unlike Western heist films, the characters are never in any danger of imminent harm or imprisonment. And despite its peppy jazz score, there’s rarely a sense of ribald excitement or chaos. It’s so staid and measured it can occasionally be off-putting, particularly in the third act when all the different pieces of the caper start falling into place. But despite this, We Make Antiques! is a low-key, relaxed little bauble. I wouldn’t mind seeing Norio and Sasuke return for a sequel.