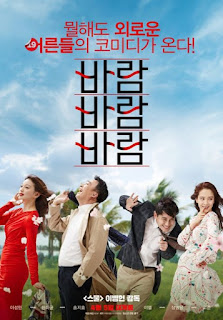 This is a Korean movie, so even though it starts out like a Blake Edwards sex farce, there will be some tragedy eventually. Men are indeed acting badly, but they are not the only ones in Lee Byeong-hun’s What a Man Wants, which screens during Fantasia 2018.

Seok-geun constantly cheats on his patient and lovely wife Dam-deok, because he is a cad. Ironically, he often tricks his straight-laced brother-in-law Bong-soo into covering for him. A lot of people would give him a pass if he had some side action, because Seok-geun’s sister Mi-young can be a you-know-what-buster. One fateful night, Bong-soo naively shows up for the pool game that was supposed to serve as Seok-geun’s alibi and inadvertently steals away the attention of his new prospective lady friend, Je-ni. Seok-geun had been daring him to have an affair of his own, so he finally gives into temptation.

Not long after the affair begins, Bong-soo’s professional standing as a chef-restauranteur dramatically improves. Alas, tragedy also strikes the family. As a result of these combined events, Bong-soo and Seok-geun effectively trade places. However, when Mi-young hires Je-ni as a waitress in the restaurant, things revert back to a farcical level.

There is a fair amount of door-slamming in WAMW, but there is also a good deal of guilt and grief. When it loses a character, the repercussions are felt all the way through to the end. Still, there is plenty of physical comedy, mostly executed without excessive mugging.


Most of that sneaking around and hiding under tables falls to Shin Ha-kyun, who is quite nimble and rather poker-faced as Bong-soo. Initially. Lee Sung-min plays Seok-geun as a roguish shaggy dog, almost like a Korean Jim Belushi, but he gets surprisingly serious during the third act. In fact, it is a rather smoothly and subtly evolving performance. Yet, the biggest surprise might be Lee El, who elevates Je-ni beyond a mere sex status, giving her complicated depth and dimension, very much in the tradition of Dada Chan.

Nobody gets off easily in WAMW, but Lee and co-screenwriters Jang Gyu-sung Bae Se-young do not hold grudges against anyone either. You might have missed the connection, but their screenplay is based on the 2011 Czech film Men in Hope, yet they definitely incorporate distinctly Korean attitudes. They also capitalize on the temperate and inviting Jeju Island locales. A nice balance of funny and sad, What a Man Wants screens today as part of Fantasia 2018
Posted by Steve Kopian at July 31, 2018