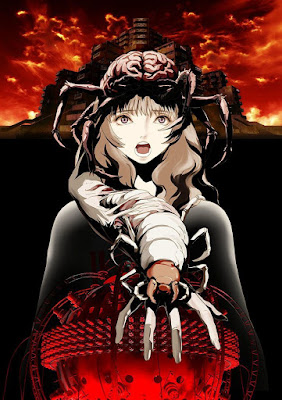 Saku Sakamoto did just about everything in bringing his ARAGNE: SIGN OF VERMILLION to the screen. I have no idea if he was wholly successful, but I do know it is great looking but strange film.

The plot of the film has a young woman moving into a new city. What she thought was going to be a bright and happy place is dark and dank. A serial killer, some call the Savior maybe on the loose.  She is also seeing weird insects, spirit bugs, around dead people and animals.

Moody, expressionistic and often down right creepy  ARAGNE is a film that works mostly on and emotional level. The plot doesn't make a great deal of sense, which in this case isn't a problem since there is enough mood and foreboding to overwhelm a small city. We are in a dream world or perhaps the ind of our heroine so what we are seeing could be suspect. Then again weird giant bugs may have invaded the city.

I like the film a great deal despite having reservations about the plotting. On the other hand after seeing the film close to bed time I found the the music and imagery invaded my dreams- which after you see the film you'll understand not to be something you want to happen.

Strongly recommended for anyone wanting a film that will hang with you forever.

Fantasia's only screening of ARAGNE: SIGN OF VERMILLION is done.
Posted by Steve Kopian at July 15, 2018