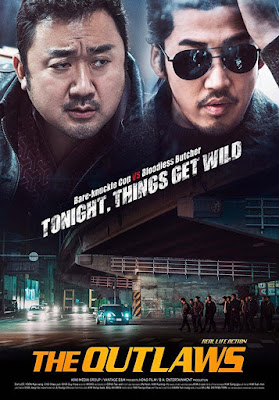 THE OUTLAWS is truly great. To be certain it doesn’t break any new ground, but god damn it kicks ass and takes names- and ultimately is so good it won several awards.

The film is the story of a seasoned cop who knows everyone and knows how to bend the rules taking on the exploding Chinese gangs who are running rough shod over the city. Given a short time to break them he goes at it with great skill.

Awarding winning film hits all the right buttons and is an absolute delight. Great characters, tense plot, super action and pithy dialog mix for one hell of a ride. I completely understand why this was a critical darling it takes a plot we've all seen a thousand times before and makes it absolutely new even though it isn't- and you don't care. Actually you just want to get back on the train and for a second and third ride. (No, it is that freaking good)

I don’t have much to say beyond that. Frankly other than saying I want a copy of this film in my collection so I can pull it out now and again, there is nothing left to say other than track it down and see it.
Posted by Steve Kopian at July 21, 2018