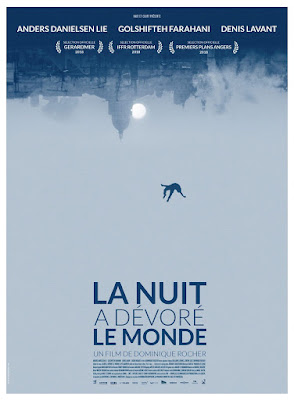 Every single person I spoke with who has seen NIGHT EATS THE WORLD compared it favorably to Richard Matheson's novel I Am Legend. While NIGHT is a riff on what we see in the Matheson novel it is not a straight out steal. Other than a man trapped in a world of monsters, things go differently which makes it worth a look.

The film has a young man visiting his ex on the night of a party in order to collect somethings from her that she took by accident when she move out. Finding them in a office he ends up falling asleep when he sits down for a minute. When he wakes up he finds the apartment empty and the world over run by zombies. He then has to find a way to survive.

Largely silent film shows us what might have to be done should something like this ever happen. We also watch as our hero tries to fight off loneliness (he misses the zombies when they disappear at one point) and just find enough food. Its a kind of grand adventure with flesh eating ghouls and completely entertaining.

Because I have to nit pick I have to say the film isn't perfect, there are little problems such we never see any bodies other than those who do themselves in, which makes no sense if zombies break in and tear people apart. However despite the small logic problems the film never falls apart as a result. It simply moves along fast enough that you probably won't'notice since you'll be too caught up in the tale,