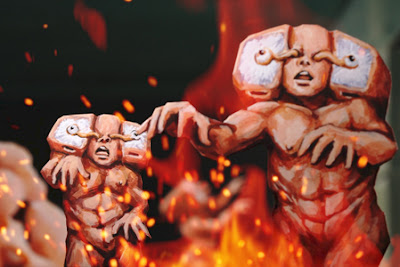 Cinematically unless you saw director Ujicha earlier Burning Buddha Man you have never seen anything like this film. Looking like a moving version of some of the most disturbing horror manga Ujicha’s films are intent on making you feel uncomfortable and horrified even in the happy moment. Any light is merely a lighter shade of black.

The story follows a bunch of kids who go to a secret amusement part with the film’s title. There the kids don protective gear for what they think will be a fun battle against fun monsters. It turns out that its fight for their lives and the monsters are mutants made by a mad scientist.

Not for most tastes this film, like Ujicha’s earlier film is going to fuck you up. It is the stuff of nightmares from start to finish, since even the normal kids who are our heroes clearly have something wrong with them with wounds and misshapen head and body parts. We aren’t in Kansas any more but in the land of truly diseased mind.

That is a rave for the work of Ujicha who at this point has proved to be one of the truly singular cinematic visionaries working today and perhaps ever. While most people will undoubtedly flee from his images, those of us who click with it will find much to chew over, beginning with the source of our delight at something so viscerally distressing. Ujicha has made a film that I both never want to see again and can’t wait to see again.

If you’re one who wants to be deeply deeply disturbed by images that will be burned into your brain forever I highly recommend VIOLENCE VOYAGER when it plays this weekend at Japan Cuts and at Fantasia July 26 and 26.  All others stay the hell away.

For more information on the Fantasia screenings go here
Posted by Steve Kopian at July 17, 2018