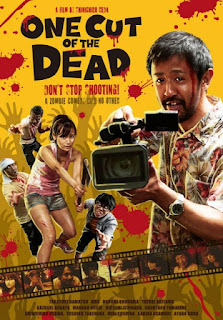 It was supposed to be the Rope of zombie movies, filmed in one continuous shot. Then the zombies attack for real. However, if you think that sounds crazy, wait until you see it all again from a different perspective. Zombies get the mash-up treatment like never before in Shinichiro Ueda’s One Cut of the Dead (trailer here), which screens during the Fantasia 2018.

Eventually, Cut evolves into a hilarious valentine to underdog independent genre filmmaking. It would pair up nicely with Graham Kelly Greene’s criminally overlooked Attack of the Bat Monsters. In fact, at one point a character in the Cormanesque spoof rather wistfully states: “in the future, people will watch these movies and laugh, but they’ll never understand how hard we worked on them.” That sentiment also perfectly fits Cut. It is a total winner that will charm the pants off horror fans. Very highly recommended, One Cut for the Dead screens tonight as part of Fantasia.
Posted by Steve Kopian at July 29, 2018