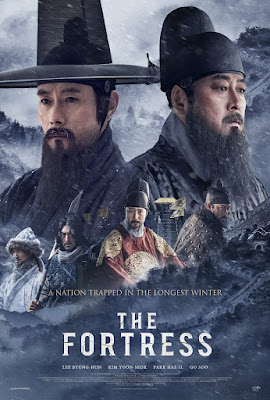 It was a lot like a Korean Valley Forge when King Injo retreated to the Namhansanseong mountain fortress during the winter of 1636, but it did not end so well for the Joseon Kingdom. They were indeed times that tried men souls, but they were made exponentially worse by the corruption and arrogant sense of entitlement held by senior members of the royal court. At least that is the revisionist perspective offered by Hwang Dong-hyuk’s The Fortress (trailer here), which plays at Fantasia today and August 2nd

History has not been kind to King Injo, for good reason. Even during the early days of the encampment, Kim Sang-hun finds himself cleaning up resentments caused by the court’s stingy, high-handed behavior. Morale will only continue to plummet as hunger and record low temperatures take its toll on the beleaguered troops.

Strategically, Kim is diametrically opposed to the peace overtures reluctantly advocated by Choi Myung-kil, a senior official who has few friends at court, yet still enjoys the King’s confidence. Nevertheless, the two foes often find themselves allied together, arguing for better conditions for the King’s soldiers, over their colleagues’ petty objections. Having seen the enemy camp, Choi knows they are badly outnumbered. News of the impending arrival of Nurhaci, the Qing Khan himself further raises the stakes. However, Kim’s desperate plan to save the kingdom has a puncher’s chance of working, but he will only trust Seo Nal-soi, a common-born blacksmith pressed into army service, as his messenger.

It is hard to believe this gritty, downbeat adaptation of Kim Hoon’s historical novel came from Hwang, the man who brought the world the Miss Granny franchise. This is a cynically class-conscious film that explicitly argues the dithering king and his nonproductive court of leeches only have themselves to blame for their spectacular humiliation. Yet, apparently, there is a robust domestic market for such sentiments, because The Fortress set new attendance records for the Chuseok (“Korean Thanksgiving”) holiday.

It is also a bit surprising to find international action superstar Lee Byung-hun playing the peacenik Choi. However, he is certainly an intriguing character, who is resigned to his anticipated infamy, if it secures the King’s survival. Lee projects the necessary graveness and gravity, but he still can’t compete with the steely gravitas of Kim Yoon-seok’s Kim Sang-hun, looking at least ten years older than the thesp really is—and they are a hard ten years.

Hwang stages some impressive battle scenes that viewers have to admire, even though he telegraphs the bitter end from the earliest stages. As result, Fortress has the vibe of high classical tragedy, with every short-sighted decision bringing King Injo closer to his downfall. The atmosphere of stately woe is further enhanced by the score penned by the legendary Ryuichi Sakamoto (The Revenant, The Last Emperor, etc.). It is an impressive film in nearly every respect, but the maddening inevitability of it all will have viewer pulling out their hair, which is probably exactly what Hwang was going for. Recommended for fans of historical epics.
Posted by Steve Kopian at July 19, 2018