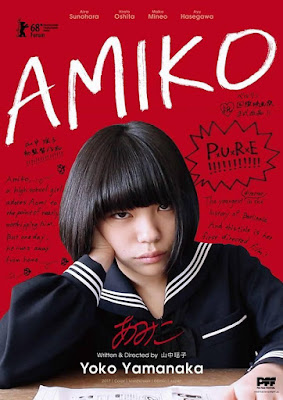 Yoko Yamanaka’s Amiko is the rare high school movie that truly feels like it was written, shot, and edited by actual teenagers, not adults trying to tap into the adolescent zeitgeist. Most, if not all, of this comes from writer/director Yoko Yamanaka who, at a meager twenty years old, was a teenager herself less than a year ago. There are moments where the film seems imbued with that special youthful energy of discovery so characteristic of eager amateurs—of realizing what weird ways cameras can be held, shots composed, moments edited together or torn apart. But these are precious few.

Amiko lazily stumbles forward like a sleep-deprived eleventh grader trudging to their first period desk, hoping against hope that they can put their head down and doze for a while without getting caught. The film follows the eponymous disaffected 16-year-old, a schoolgirl with a bad case of post-pubescent ennui wherein everything and everyone is stupid and pointless. Except for Aomi. Beautiful, sweet, Radiohead-loving Aomi, budding soccer star who’s equally disaffected by the trials of life. Amiko falls for him hard and they initially seem to hit it off, particularly in an achingly beautiful sequence (the film’s highlight) where the two walk the long way home from school over a mountain and through a small city as the light gets darker and darker until they vanish into near-invisible silhouettes of shadow. But one day Aomi unexpectedly drops out of school and runs off to Tokyo with a college student. And not just any college student: a big-eyed, big-boobed, barista-by-day, bar-hostess-by-night bimbo, the very antithesis of everything she thought he stood for. In a fit of hormonal pique she runs off to Tokyo to find him and ask why a Thom Yorke-obsessed cool-guy could fall for someone so…phony.

The last half of the movie is devoted to her aimless big city wanderings in a stream-of-consciousness style reminiscent of the early literary Modernists, interspersing memories, fantasies, and encounters with Tokyo weirdos.

But there’s no momentum, no point, no coherent idea propelling Amiko or the film itself. In what feels like a metaphor for the film, Amiko initially doesn’t seem to know what to do when she finally finds Aomi. She probably should have thought of that before she skipped town, much in the same way Yamanaka should’ve figured out what, if anything, she wanted to say when she started work on this movie.