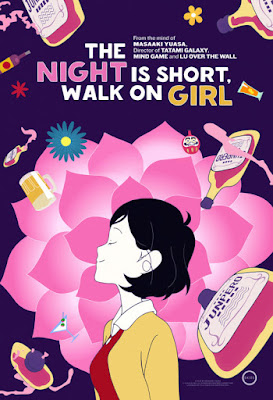 Is there an anime director working today as consistently exciting and unpredictable as Masaaki Yuasa? Since his directorial debut in 1999, he has consistently dazzled and perplexed audiences with a string of bizarre features running the range from surreal comedies (Mind Game [2004]), kaleidoscopic children’s fantasies (Lu Over the Wall [2017]), and misanthropic, hyper-violent, hyper-sexualized horror dramas like the Netflix series Devilman Crybaby (2018). His newest film to finally make it over to the West—Night is Short, Walk On Girl—is a bubbly romantic comedy that feels like bathing in warm champagne.

Based on the novel by Tomihiko Morimi, the film watches in sublime amusement as a hapless college student nicknamed “Senior” (Gen Hoshino) tries, fails, and tries again and again to confess his feelings to the mercurial “Girl with Black Hair” (Kana Hanazawa) during one peculiarly long night of drinking and partying. As must happen in these stories, Senior’s increasingly absurd attempts are foiled by increasingly absurd contrivances that eventually become downright Bunuelian. Some of these include having his pants and underwear stolen by a depressed tycoon living on a triple-decker passenger train, being forced to participate in a spicy hotpot eating contest to win a rare copy of a book the Girl loved as a child, and crashing a guerrilla-style street rock opera that’s shanghaied the Girl as the romantic lead. And along the way there are drinking contests, Sophist dance parties, drinking contests, underground societies of erotic ukiyo-e collectors, drinking contests, crossdressing security guards, sudden rainstorms of apples and carp, mischievous gods of used books, and more drinking contests. (The Girl has a superhuman love for and tolerance of alcohol.) Oh, and the very laws of time may or may not have broken down, seemingly propelling Senior and the Girl through the span of an entire year in a single night.

It’s delightful, delirious, delicious madness that perfectly captures the breathless euphoria of falling in love and the first time you truly realize just how scary and wonderful it is. Yuasa once listed Tex Avery as one of his key influences, and the anarchic elasticity of American cartoons is obvious in every frame, particularly in his love of hyper-exaggerated Ub Iwerks squash and stretch where characters can suddenly spaghetti their way across rooms, down alleys, and across frames. For Yuasa, going off model IS the model, and the film clips along with the same infectious sense of spontaneity and joy.