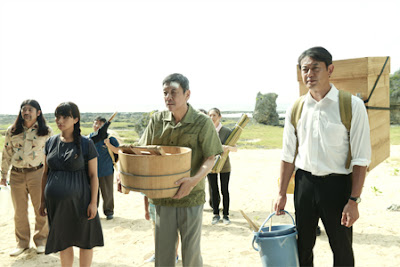 Born Bone Born presents a problem for me. It is a really good film that has a final image that is truly great. It is a moment that ties everything together including the films exploration of why and how we honor our dead. The trouble for me is the final transcendent moment is so much better than the rest of the film that I want to over sell the film.

On the island of  Aguni the dead are not cremated. The bodies are buried and then several years later the body is disinterred and the bones are washed and cleaned in a special ceremony. Several years after her mother dies, Yuko, returns home very pregnant. Her brother is cranky, her father has disconnected from the world via drink and she is insisting she doesn’t want to be a bother but things spin out in unexpected ways.

A low key comedy the film has good many laughs from our recognizing of the situations we are seeing on the screen. Everyone is people we know from our own lives. While director bends things for his purpose an laughs things remain, for the most part real.

And it all is sweet and nice and low key. It’s a film that largely entertains even as it is clearly angling to make a point or tries to be quirky. I liked the film enough that I ended up seeing it two times. It wasn’t my intention but I wanted to see part of the film a second time for what I was intending on writing on the film and fell into a second time.

However when I sat down to write this piece on the film my thoughts changed. I became less interested in the film then I was in the final image and how it seems to amplify a small little film into something greater. I was consumed with how the film flips in the last instant. Is that enough to call the film great?

While I think in some films I think it does (James Gray's The Immigrant for example) I don’t think it does. I feel that way because in watching the film a second time I realized knowing the end didn’t make the film greater. I didn’t like it more. In a weird way I was kind of disappointed the second time through because I realized that it didn’t live up to the end. No it didn’t become a bad film or even less than it was, just a disappointing one since for me it didn’t live up to the potential I realized it has.

Disappointment or not I do like the film and recommend it when it plays July 21 at Japan Cuts (For tickets and more information go here)
Posted by Steve Kopian at July 19, 2018