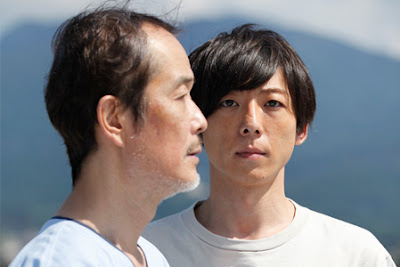 Based on the childhood experiences of screenwriter Koji Hashimoto this little drama will kick your legs out from under you and haunt you for a long time. It is reminder that how we see those we call family- even those we hate - is not always a clear indication of who these people really are.

The film begins at a funeral service. Koji's long MIA father has died and he and his brother are holding a service for him. Unfortunately it is right next door to a temple holding a service for someone with a similar name so there is some confusion of mourners. As Koji waits for the service to start he remembers life with his father, a hardened gambler who spent all his money on the next game of chance. Once the service starts, the friends of his dad begin to tell their life with the gambler and it is very different than what his kids experienced.

Crossing the line between tragedy and comedy BLANK 13 with move you all over the place. At times crushingly sad the film also has moments that are laugh out loud funny. This is life as it is really lived. Funny one moment, sad the next. Some how first time director Takumi Saitoh manages to keep the film entirely grounded as it bounces back and forth between emotions. To say that h does so perfectly doesn't truly explain what an achievement it is since more often than not even the best directors fumble the emotional shift.

The film is a lovely reminder that we really don't know the people around us. We don't know their lives with other people. We also don't know what they do when we aren't around or what means something to them. When the child Koji gives his father an essay and he says he will read it later w assume he would dismiss it and throw it out, little do we suspect that he didn't and that years later he was still talking about it-just not to his son.

I was moved by BLANK 13. I was so touched that in prepping for Japan Cut I had to stop watching films when the movie was done because I was so lost in my thoughts. I can't recommend this small gem enough.