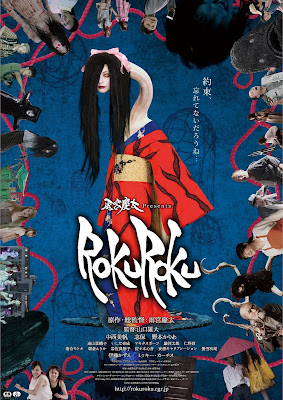 While I have always loved the strange monsters in the old Yokai monster films, I never found them scary. I’m sure if I saw an umbrella demon or a witch with a long neck I would be terrified but in the films from the 1960’s they just never scared anyone. They were kind of a smaller scale kaiju creatures. And while I was never scared before, that changed with ROKUROKU, a neat little updating that has genuine shivers in it’s story.

The basic story has a young woman and a fiend confronting a witch who travels around in a magic hotel. Long ago they made a half remembered promise to the witch and she has come back to collect. Attached to this are this chilling little takes of the Yokai monsters doing terrible things. It is an absolute delight.

To be honest the weird little tales are the best part of the film. Small little cakes of fear they send genuine shivers up and down your spine. To be certain the effects are all over the place, but the stories and filmmaking is damn strong that we get chills.

To be honest I could wax poetic about it all in great detail, but why? This is a sweet little confection that tastes good and entertains. It’s a film I just unashamedly love to death. It’s a old school monster movie with new school chills. Highly recommended
Posted by Steve Kopian at July 22, 2018