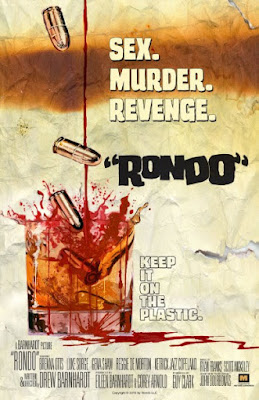 Paul, a vet suffering from PTSD is sent to a shrink by his sister, however the shrink has a weird prescription for him to get better, namely bondage and fetish play. However things don't go as planned and Paul is soon on the run.

A great cast and a first rate premise are left to flounder by smart ass knowing tone that plays it all for laughs. For get the notion that this is a serious thriller, this is really a satire of the erotic thriller genre. Unfortunately instead of walking the fine line of thrills and laughs it falls on its face. Honestly this shouldn't have been played as a comedy, but a dead on thriller, or if not a wholly serious  one, than one that is played much straighter and less knowing than this is. The trouble begins with the voice over which makes it sound like an commercial for Geico  and then goes on from there. Nothing is played straight, everything is played for a laugh with people suddenly creeping around or in a silly manner for no discernible reason. It kills any suspense or desire to watch because it comes off as dumb.

Which is a shame because there is a good story here. Sure the plot has been done before, but rarely with a cast this a good. They manage to sell the film at least a little bit.

Not really worth your time or effort Rondo is a miss that could have been hit if it just took off the clown suit.
Posted by Steve Kopian at July 28, 2018