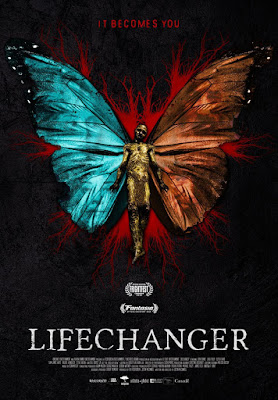 I'm going to go at this two ways.

If you don't want spoilers I'm going to simply say that if you want a great horror film that transcends the typical monster on the loose tale, and goes to that rarefied land where horror films about more than just scares then see LIFECHANGER. Trust me this is a truly great film.

...on the other hand if you want more details  and don't mind being told a thing or two keep reading.

The simplest way to explain LIFECHANGER is to say it is about Drew who is a body thief of sorts. Jumping from identity to identity he is on a quest to find the one person he ever encountered who seemed to love him for himself.

Told in a killer voice over with a sterling cast doing amazing work to create one seamless performance, LIFECHANGER is a huge glittering gem of a film. Rarely have so many people come together to create one character. If you are confused by what I'm saying just see the film and you won't be confused any longer, they are all fantastic.

Nominally a horror film LIFECHANGER transcends the genre to become a killer meditation on love, loss, relationships, life and a whole bunch of other things. Director Justin McConnell has found a new way to examine human existence and created a film that not only will move you emotionally on numerous levels but will get you thinking for days.

This is a quiet masterpiece hiding in plain sight. It was a film that sounds like something anyone other than a horror fiend would pass over. I almost did. However because the film was laid at my door as something special. Once I saw the film I knew how why I "had" to see it and then I started emailing my friends who are also covering Fantasia to tell them that they might want to put this film on their coverage list.

I kind of love this film.  It is the sort of small film that I love stumbling upon. One where nothing was expected, where it was offered to me to review and I decided to take a chance (honestly until the PR film connected to the fest reached out I was not going to see the film). And having taken a chance I've found a truly special film that, if all goes right, is going to be treasured film for more than just horror fans.

One of the gems of Fantasia and 2018, it is highly recommended.


If you want more information on LIFECHANGER read the interview I did with director Justin McConnell earlier this week. It can be found here.
Posted by Steve Kopian at July 20, 2018