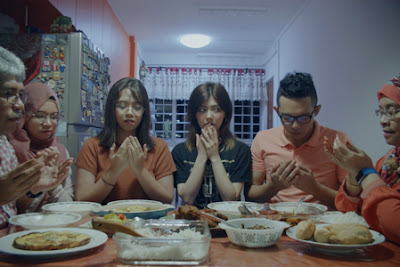 I like to think Daisuke Miyazaki’s Tourism is the kind of movie Agnès Varda and Chris Marker would make if they were bemused, slightly detached millennials with nothing but a long weekend off from work and two iPhones: a DIY meditation on the essential interconnectivity of mankind that casually blends narrative storytelling and in-the-moment cinéma vérité documentary to create something melancholic yet hopeful, cerebral yet heart-felt, intensely culturally specific yet defiantly globally minded.

I suspect many people won’t make it through the deliberately tedious first half, and for good reason—it’s essentially a video diary of Nina (Nina Endô) and Su (Sumire), two disaffected Japanese twenty-somethings working mind-numbing blue-collar jobs who win plane tickets to anywhere in the world in the lottery. They choose Singapore (largely because you supposedly don’t need to speak English to get around there) and set off on their first trip outside Japan. We’re then treated to the equivalent of a thirty minute Instagram story: them going through airport security, them playing with video filters during the flight, them finding their hotel, them visiting tourist traps, them futzing around with selfie sticks, them window-shopping at malls.

But for all its banality, there’s a hypnotic undercurrent of discovery as these two women slowly realize just how small the world is, even if that realization is subconscious. This subtext becomes overt text in the last act when Nina loses Su and her iPhone and gets lost in Singapore’s slums. As she wanders helplessly through the streets, passing temples and mosques, crowded town squares and darkened alleyways, she finds helpful strangers in the strangest places. A random woman she asks for directions turns out to be a secret otaku who sings her the theme of a Japanese kid’s show. Elsewhere she runs into a Muslim family who takes her into their home and feeds her while joking about the different ways their cultures pray before meals. And finally she attends a roof-top concert where a Japanese Yoko Ono lookalike belts out Beatles covers.

This is the ecstatic wisdom of Tourism: the farther away you go from home, the more familiar things and people get. In a way it reminds me of Joji Koyama and Tujiko Noriko’s Kuro: both films show us a surface narrative about culturally misplaced Japanese women while obliquely hinting at deeper, more esoteric truths. But while Kuro depths may have echoed of horror in a disconnected world, Tourism echoes of hope in a digital one.