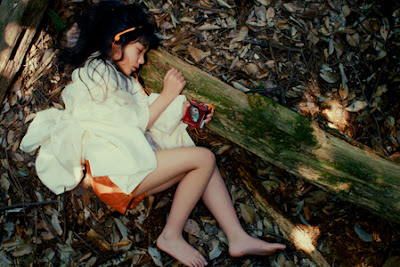 It would seem the New York Asian Film Festival is not the only local film festival to dole out prizes to suspiciously underwhelming titles(ed note: the film won JAPAN CUTS Award, 2018 Osaka Asian Film Festival: Indie Forum). This year they decided to give an award to Moët Hayami’s KUSHINA, what will you be, a pensive yet ultimately underwhelming film examining intergenerational conflict in a family of women living off the grid.

Following some unspecified trauma, the stern, imperious Onikuma (Miyuki Ono) retreats from society into the mountains with her pregnant fourteen year old daughter Kagu (Tomona Hirota). Fourteen more years later and the two have founded a commune in the woods for women they rescued from committing suicide in the forest. The women have little to do in their rustic paradise other than grow crops to trade for supplies, gossip, and dote on Kagu’s increasingly curious daughter Kushina (Ikumi Satake). But just as Kushina starts to seriously question the world around her, two strangers enter the camp: anthropologist Kazano (Yayoi Inamoto) and her male assistant Harada (Suguru Onuma), both academics eager to study their strange community. Kazano quickly becomes attached to the inquisitive Kushina while Harada understandably becomes the village’s new center of attention, much to the fury of Onikuma. Despite their best intentions, Kazano and Harada are intruders, and their presence demands a costly reckoning that might decide the fate of little Kushina for the rest of her life.

Largely self-financed, Hayami felt free to attempt a more loose, idiosyncratic visual style than many of her Japanese contemporaries, revealing in an interview with Genkinahito that the film’s visual sense came largely from three different sources: Hayao Miyazaki’s awe and respect for nature’s totality, Shōhei Imamura’s obsession with ancillary environment shots in The Ballad of Narayama (1983), and the textures of British academism painter Frederic Leighton, in particular his piece Study at a Reading Desk (1877). Indeed, KUSHINA seems primarily interested in embodying the moods and rhythms of nature itself, regarding its human characters as small parts in a larger web of time and wildness. But it’s so preoccupied with its images that its characters and plot fade into wispy nothingness. It’s not that this approach can’t succeed—Andrei Tarkovsky spent the better part of his career mediating on the relationship between mankind and nature—but there’s no real philosophical or emotional undercurrent stabilizing the whole.

All of this leads to the inevitable question: of all the brave, daring, unique films at this year’s JAPAN CUTS, why was this one selected for an award? The cynic in me says it’s because it’s a micro-budget indie by women about women. But who knows? Maybe the jury members just really, really dug the cinematography. It is first-rate.