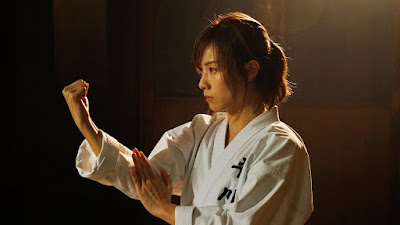 THE EMPTY HANDS is nothing if not elastic: it’s not funny, but there are moments of humor; it’s not sad, but there’s a prevailing melancholy beneath it; it’s not an action movie, but there are a handful of gruesomely graphic fight scenes; it’s not a psychological study, but it careful interrogates its characters’ emotional interiors. It veers wildly between introspective naturalism and hyper-stylized carnage on a whim, leaving one with a prevailing sense of whiplash. The film’s schizophrenia is only salvageable only thanks to To’s confident direction and an excellent lead performance from Stephy Tang.

Tang plays Mari Hirakawa, a Japanese-Chinese twentysomething with no real ambitions in life. When her strict father—a local karate instructor—dies, she plans on selling their family dojo and splitting it up into rentable apartments, allowing her to live a carefree life on the rent proceeds. But her dreams of easy street are smashed when she discovers her father only left 49% of the dojo to her and the other 51% to Chan Keung (To), a former pupil who recently got kicked out of the Triads for assaulting his boss when he discovered he was trafficking high school girls. To her horror, she finds that Chan has every intention of preserving her father’s dojo with a new crop of young students. Mari throws a temper tantrum, resulting in Chan giving her an ultimatum: if she can win a single match in an upcoming karate tournament, he’ll hand over the rest of the rights to the dojo and leave. So she trains, rediscovers her childhood love of karate, and fights a disastrous match against an MMA she-beast.

Despite it’s short run-time, the film seems aware that it doesn’t have much plot to speak of, so it fills itself with digressions such as Mari’s relationship with her best friend, a message parlor prostitute, her affair with a local philandering playboy, and numerous silence-soaked trips to a local ramen shop. THE EMPTY HANDS isn’t trying to be ROCKY or RAGING BULL—it wants to be a reflective I’ve-already-come-of-age-and-now-I-have-to-act-like-it story. And while there are meaningful moments, it still feels to unfocused to work as a full-length feature. There’s plenty of meat here, but much too much fat.