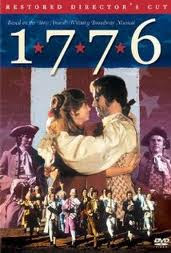 As we close out our week of films we were never suppose to see and head into the holiday weekend I want to take a look at a great holiday film 1776.

Okay it’s not related to the holiday that is Sunday, but it still is a holiday film. Its also not a film we were never suppose to See, rather it has a sequence which was relatively recently restored to the film with in the last couple of decades.

Based upon the Broadway stage play about the writing of the Declaration of Independence by Peter Stone and Sherman Edwards 1776 is also nominally a musical since it contains several songs, however the songs are used sparingly and used to enhance what is going on in some sequences as a kind of short hand. If you think of songs like “He Played the Violin” you have the entire relationship between Thomas Jefferson and his wife laid out in the course of a few minutes. Similarly a song like “Sit Down John” lays out John Adams and the congress with a skill that ten pages of dialog couldn’t do.

At other times the film (and the show) ignores music and goes simply for drama. I mean when was the last time that you can remember where a musical didn’t have any music for around 45 minutes?

The films strengths are many beginning with Peter Stone’s well researched script. As you will hear if you listen to the DVD commentary or read the notes Stone wrote for the play’s script, pretty much everything you see is what happened. To be certain there has been some changes but all of the major points are there and can be backed up via documentary evidence. I’ve played the commentary track for friends who thought the film was a light hearted goof only to walk away with a deep respect, this is, in many ways what happened.

Another of the strengths is that the producers of the film pretty much brought the entire Broadway cast to Hollywood and had them recreate their roles. It’s a stunning move that not only manages to record the show in some form, but it also allows for well worn a nuanced performances which are the result of having played the roles hundreds of time.

The film, as it now is on DVD, contains a recently restored sequence for the song Cool Considerate Men. This is a number sung by the Southern delegates about their attitudes and how they view themselves. It’s a nice song but it’s probably the one truly extraneous song in the entire play. I suspect it existed in order to give the leads some time off stage and to allow some of the vast cast something to do other than be background. Originally included on the laser disc as a black and white clip inserted back into the film (how the sequence was first found) it was later found included on the DVD in color.

Personally I think the film should have been left out of the film since its inclusion stops the film dead. Its not a bad song, but it serves no real purpose in the film. As I said the song filled time on stage, but having seen the show when it played on Broadway a decade ago with Brett Spiner in the lead I can say it should have been cut there as well.

One weak song aside you really owe it to yourself to see this film, especially on DVD where you can listen to one of the best commentary tracks you’ll ever run across.
Posted by Steve Kopian at December 23, 2011