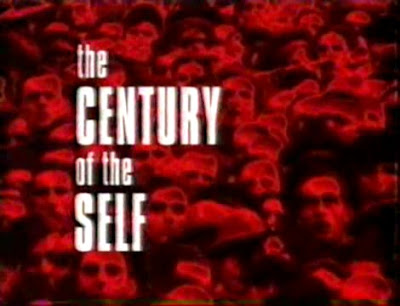 In going through the Adam Curtis series for this week’s posts I would sit down with a pad in my lap and take notes; carefully making sure to make notes on each episode of the series. I say this because outside of The Power of Nightmares, all of Curtis’s films could pretty much be viewed as a series of loosely connected films. Yes, the films tie together, but at the same time you could watch them as self-contained films on their own.

Add The Century of Self to the small group, only two titles, where you have to watch the entire series to really understand what Curtis is getting at.

The series is the story of psychology and psychoanalysis from Freud, through his nephew Edward Bernays who made a fortune in advertising and Freud's daughter Anna, who tried to control what her father did, on ward to today an how all that they did shapes and misshapes our lives. It’s the story of the ups and downs and misappropriation of the drive to make us better as a society and individuals. It’s how the story of how our striving to make us truly free has put us in danger of being controlled by forces outside of ourselves.

You’ll forgive me for not going too deeply into this series here, it’s not that I don’t want to, lord knows I have enough notes, rather it’s simply a matter of not being able condense it down to manageable length. The film is four episodes full of material that really should be seen a couple of times to fully get all of the connections. It a series full of AH HA moments as things early on are brought to a real conclusion in the end.

The film is a jarring look at consumer and social history that will have you looking at advertising, governmental pronouncements and psychology in ways you never expected. I never expected to learn that tobacco manufacturers got women to smoke with one daring publicity stunt, that a coup in Honduras was staged to prevent United Fruit from losing its plantations or that psychoanalysis could go so horribly wrong (Anna Freud’s show case ended up with suicide, pain and misery).

Even knowing bits of what Cutis lays out, I never knew all of this. I also never expected to see it all sewn together like this. This is Adam Curtis at the top of his game and one of the best things he has done. It’s probably the one series that I've reviewed this week you really must see, you really won't trust anything any political person, any bit of advertsing or self help guru tells you

I should mention, that if you’ve seen some of Curtis’s other films, The Living Dead in particular, you’ll have run across some of the footage used. On the other hand if you’ve seen any of the other films that he’s put together you’ll quickly realize that all of Curtis’s films tie together into an uber story of the last century.
Posted by Steve Kopian at September 06, 2012