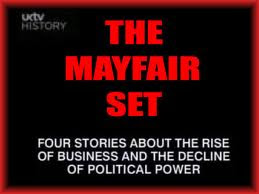 Adam Curtis’s films are quietly upsetting affairs. They are cleverly designed to show us how we got to the now, how we have been taught to think as we do, and then to show us that what we thought is the way things really are, isn’t. If you don’t want to hear what he is saying you may consider him a crack pot or conspiracy nut (a charge I've never understood since there is never any conspiracies in view). If you are at least open to what he is saying then you will find that how you see the world suddenly changing.

In the Mayfair Set Curtis looks at the economy of England and the United States. He charts how in the wake of the Second World War the old order was slowly swept away in a drive to make more and more money. It’s a shift that has driven the elites to call out for a truly market driven economy even as that same market economy is laying waste to the economies of the world with it’s volatile take no prisoners approach.

Starting with a look at the old boy system that kept things in the hands of a select few Curtis then moves on to show how the illusions of the old way of Captains of industry were wept aside by young turks looking to make a big bucks. Curtis then shows how the move to make more and more money broke the economy anything of value was sold off in order to drain out the cash. The great manufacturing plants of the UK and elsewhere closed and people were put on the street bankrupting the governments…

Curtis’s premise that we can make huge fortunes at a great rate and at certain cost of wrecking the economy, and even our new gained wealth is a frightening one. It’s also something that we can not easily step away from since the lure of quick money is driving more and more people into places that they really shouldn’t. It’s a system that is fracturing how we see the world since the creation of this kind of profit requires that we don’t look at anything other than ourselves. If we can only do this so long as we don’t care that we are creating the unemployment and social inequality that the wealth is suppose to be ending… If you ever wanted proof that the Laffer Curve or the trickle down theory don’t work here it is. Money chases money and ultimately that’s all that this about since it’s slowly stripping away any means of actually creating anything.

In watching Curtis’ 15 year old film you can see how things haven’t gotten better, how the drive for more profits are slowly eroding the economy. Its a frightening tale that was probably scary in its day, but now its positively terrifying.

This, like all of Curtis's films is one to track down, more so if you want to know why we are in the dire financial situation we're in see this series. It will explain it all to you simply, something that I don't think even your broker .

It can be found streaming on line or on DVD from collectors (The series does not have an official release- other than streaming- because of how the found footage is used.)
Posted by Steve Kopian at September 04, 2012