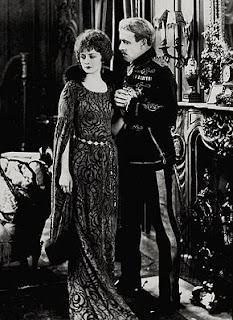 One of the first, if not the first, screen version of Anthony Hope's classic tale of romance and adventure was a big budget version with Lewis Stone as Rudolf Rassendyll and his Cousin the King of Ruritania and Ramon Navaro as the evil Rupert of Hentzau.

The plot, for those unfamiliar, has Rassendyll vacationing in Ruritania on the eve of the coronation of the king. Because of an ancestor's dalliance years before he has royal blood flowing through his veins. Even more so he is a near spitting image of the soon to be king. When the king is kidnapped by the evil Rupert so that the King's brother can take the throne, Rassendyll is pressed into impersonating his cousin until the king can be rescued. Danger lurks and complications arise as the bad guys try to get rid of Rassendyll and the impostor falls head over heels for the Princess and betrothed to the king.

Huge scale production seems to be the most faithful to the book, as far as I can remember. The good guys are good, the bad guys vile and the romance perfectly heartbreaking. Everyone seems to be playing their parts exactly as I remembered from when I first read the novel all those years ago.

What I like about the film is that the film is very nicely paced. We see more than in other versions. Yes I love the Ronald Coleman version, and I adore the Stewart Granger version (which was filmed using the Coleman script), but they go for the swashbuckling adventure and many characters are lost, mostly the people on Prince Michael's side are brushed aside. Here we get more bad guys than just Rupert. There are other military men helping in the plots. The film also takes time out to let characters and situations grow. The love between the doomed lovers for example feels more real than in other films where it seems more to be a they are in love because they are the stars.

At the same time the film maybe considered slow by today's standards. if you need Michael Bay rapid cuts stay away, you will be asleep by the second reel.If you don't need that get yourself a copy, a big bowl of popcorn and enjoy yourself.
Posted by Steve Kopian at September 21, 2012