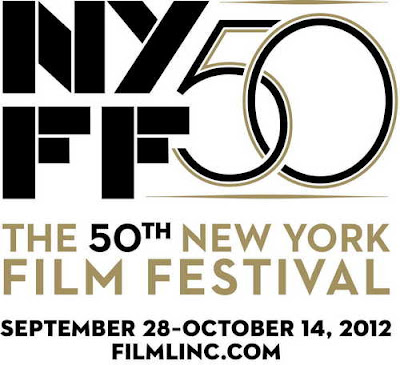 Tomorrow the New York Film Festival opens with the World Premiere of The Life of Pi. The press screening looks to be a hot ticket, just as the gala screening is, and with luck John will be able to secure a seat and report back on Ang Lee’s latest.

For John, Peter and myself the festival started two weeks ago when they began the press screenings. We’ve been in and out of them, as much as our schedule has permitted in order to bring you word on many of the goodies at this year’s festival, as you've no doubt seen all week.

However despite that we are hopelessly behind. Even with the head start we simply have no chance at covering it all. The Convergence side bar which looks at the state of film now and multiple platforming is not going to be reported on because of personal conflicts. The Filmmaker series might only be touched on if we get a chance to stumble into something. Despite having tickets to well over a dozen of the public screenings we won’t manage to see all of the main slate films. I suspect the only thing we may see completely is the three film Midnight Movie sidebar, simply because it’s only three films

As it stands now we at Unseen are looking to report on around fifty of the titles in one form or another. Since the festival runs for the next 17 days there is going to be a lot of room for additions so keep reading to see what else we get ourselves into. (And keep in mind that other things will be happening during the festival, The Korean Cultural Service will still be screening free films, The New Yorker Festival is happening, MOMA is starting its Film Preservation series and there are regular films being released.)

First and foremost you should look to score tickets for Next Fridays screening of Chris Marker’s San Soleil. This is a trippy travelogue that is a regular staple in my movie watching. It’s a film that changes with each viewing. It’s a rare film that always seems new with each viewing. I reviewed the film two years ago (The review is here). I loved it then and I still love it. Sadly I will not be able to see the film, as it should be seen on a big screen since its single screening is at noon, which puts it in the middle of a day of press films. I can’t go but you should. You’ll thank me.

Three Events I want to mention, two of which are sold out, but which you may want to try and pick up a stand by ticket for. I would review the films on their own but they are screening as special events with talks so just reviewing the film is kind of pointless.

Saturday Frank Oz is bringing his preferred cut of Little Shop of Horrors to the Festival. A darker, more down beat film, the film was tinkered with by the studio. I had always heard that Oz’s cut was lost, but apparently not and it’s getting a theatrical screening before it hits DVD in a few weeks. I would make an effort to go since any chance to talk see Mr Oz should be jumped at. On top of that it’s a great film about a boy and his carnivorous plant. I really want to go to this but I have a birthday party to attend and I can’t miss it under penalty of death.

Tuesday the Princess Bride is being screened complete with a cast reunion. If you haven’t seen the film before you must go. If you have you should go as well since it has the cast there. I’m again missing this because I’ll be an another screening. I’m working on getting coverage and if you read a report you know I twisted someone’s arm enough and I managed to score a standby ticket.

On the 14th there is going to be a special screening of Hitchcock’s Marnie. This much maligned film leaves many people flat despite being considered a cult classic. I’m not a particular fan of the film since I find the characters too cold for my liking. The film is notable for starring Sean Connery as a real SOB who blackmails Marnie into marrying him. The reason to go is that the festival is screening it with a lecture on the film. If there is one thing which I have learned over the years is that with rare exception, anytime a film is getting screened with a special talk beforehand you should go. Films you may not have liked before you will find you now like. I really wanted to go see this, but by the time I rejiggered the film, I found that the screening appeared on the list of sell outs. I’m not going to be able to take a chance for a seat, but if you can go.

For now that’s it. Gotta get back into the darkness so I can report back on whats going on. Expect almost total NYFF coverage between now and the 14th so keep checking back.
Posted by Steve Kopian at September 27, 2012

Email ThisBlogThis!Share to TwitterShare to FacebookShare to Pinterest
Labels: nyff 2012