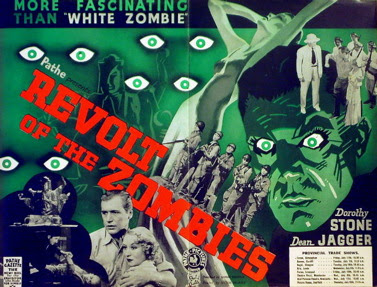 The plot of the film has a Cambodian priest coming to aid the French during World War One. He is willing to use his powers to make an army of zombies to help the French win the war. When a successful demonstration frightens the French as much as the enemy, the priest is locked up to save mankind from his power. While confined the priest is killed by someone looking to learn the secret. The French are frightened that someone else might learn the secret of zombies and sends an expedition to Cambodia to find any trace of the secret so it can be safeguarded. Unfortunately one of the men sent on the expedition discovers the secret just as his love life goes south and he begins to put his new found power to a dark purpose.

If that sounds exciting you might want to try this clunky little film, though be warned it turns dull for the middle stretch. Starting with a bang this movie hooks you with the premise of a zombie army fighting in the trenches of the western front, and then crashes into a ditch as the plot shifts to Cambodia and becomes, for a good chunk of its running time, a soapy love story. Its not terrible but but doesn't belong in a horror movie. If you cut the love story out you'd have a great 30 minute horror film. The romance, while a motivating factor for what follows, ends up being more filler than vital plot material.

Not the all time turkey that some people have labeled it, this is a movie that has a great start and great end but clunky middle. If you can get past that middle you'll probably find yourself liking this movie, if not you're in for a long night at the movies
Posted by Steve Kopian at September 08, 2012