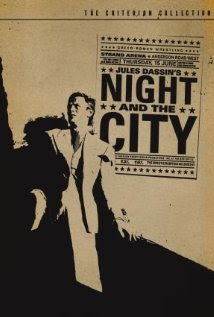 Richard Widmark stars as Harry Fabian a small time hustler who always thinks he has all the angles covered, though he never does. Harry thinks he's found away into taking over the professional wrestling world. Unfortunately he's too stupid to see that not only are the odds are against him, his past is also rapidly catching up with him.

Harry Fabian is not an honorable man

Widmark is amazing as loser Fabian, a man forever seeming cocksure of himself until the tables begin to turn and the frightened child inside him comes out. It's a performance that seems to run counter to the typical cool headed heroes (or villains) that he normally played in the later part of his career, and as a result it makes me extremely uncomfortable. I don't like watching a man of stone I admire unravel. The effect is the result of hindsight, but it's still unnerving.

Night and the City is one of the granddaddy of all film noirs. Shot in a moody black and white in the dark back waters of London. It's a London most other films never show us. This is as noirish a setting as you can get. I think it hits every noir cliché (black and white photography, all night in setting, a hero with hubris, bad guys only marginally worse than our hero…) with the exception of a girlfriend who is a real femme fatale, but does so so well that you never realize it...on the other hand this is one of the films that set up the rules for what noir was and is so it never feels like it's aping anything. .

If you've ever wanted to know what a film noir is, see this film.

Hell, if you want to see a grand classic of cinema (that really is a classic) see this film.

This is a must see, especially on a big screen where you can lose yourself in the inky darkness on the big screen.

A treat and then some.

The film gets a single screening at the New York Film Festival Sunday evening at 6:30
Posted by Steve Kopian at September 25, 2012