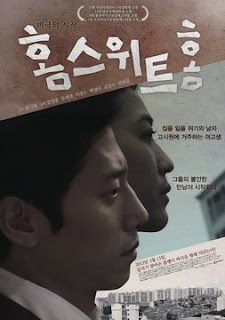 I saw the film some time ago and really wasn't all that impressed. Seeing that the film was screening as part of the Korean Cultural Service series I tried it again. (To be honest the reason I watched it a second time is that there is a cadre of film fans who absolutely love this film).

A man leaves his wife and daughter and takes a room in a low rent lodging house in order to hide out from creditors and himself. There he deals with the staff, the other residents and potentially some ghosts (death and the dead seem to hang over the place).

Going for a mood the film creates an atmosphere that is very uneasy and somewhat disturbing. It's a film that some people love, and others, myself included,  are not particularly fond of.  It's not a bad movie, but to be perfectly honest the film is more interested in mood  then telling a compelling story. While I freely admit I didn't like the way the film made me feel (I say that in a good way) I also didn't much see the point of it all.

On the other hand I've read some glowing reviews on line for the film so I can't dismiss the film completely out of hand...

Ultimately I think if you're seeing this for free give it a shot. If you're paying for it...I'd pass..,

... however the movie plays for free Tuesday night in Tribeca and is worth trying.