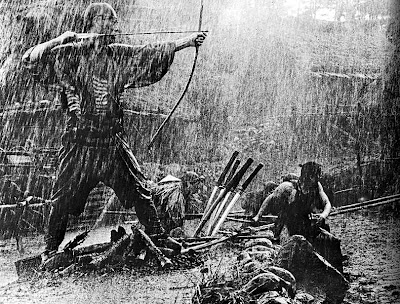 Its my dad’s birthday today and I thought I’d say a few words on The Seven Samurai. I picked this because Dad likes the film and finds that every time he runs across it on cable he stops and watches it to the end. What is supposed to be a couple minutes of channel surfing becomes a 3 hour and 15 minute investment of time.

You all know the story of a dirt poor village under siege by bandits who hire a group of ronin to protect them. The seven men train the villagers and beat back the bad guys before heading off once more to wander the countryside.

This is a deeply moving story that has been retold any number of times officially (Magnificent Seven, Battle Beyond the Stars and A Bugs Life) and unofficially any number of times more. It’s a story that somehow touches you despite it now being a kind of cliché (any film where people are brought together to fight a common enemy intentionally or unintentionally riffs on this film). It’s that rare well raided classic that is just as powerful now as when it first came out.

For me the film is not only one of the greatest films ever made but also one of my most favorite films. I make this distinction because most of the films I think are the best ever made are not my favorite or vice versa.

Why do I love the film?

For me it’s because the film has great characters. Not only do we get to know the seven men hired to protect the villagers, but we also get to know the people they are protecting. We know them inside and out and we know their philosophy. We know why the men are fighting, and it’s not simply good versus evil. I love that by the time the fighting comes we are more than invested in what happens. We hurt when people die because the characters are more than just friends.

And of course there is the fighting. The huge confused battles shot in moody black and white are wonders to behold. The battle in the rain is astounding and exhausting and has never ever been equalled.

The film is rightly hailed as a masterpiece of world cinema and had Kurosowa never made another film he would have had an unbeatable reputation based on this film alone.

If you’ve never seen the film do so. Get yourself some popcorn and some drinks and see it. Trust me it’s three plus hours will fly by.

And if you’ve seen it before, see it again. One can never see a great film like this too much. 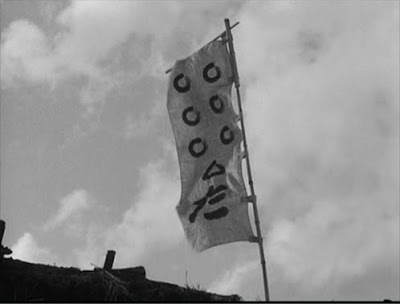