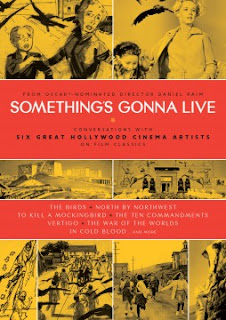 Here’s a confession: want to know the real reason why I enjoy cinematic fare as disparate as Hong Kong-set action movies, superhero flicks, and glossy urban crime thrillers? Actually, maybe that’s not such a disparate group after all, so I’ll throw a wild card into the mix: documentaries such as Norberto Lopez Amado and Carlos Carcas’s dazzling How Much Does Your Building Weigh, Mr. Foster? 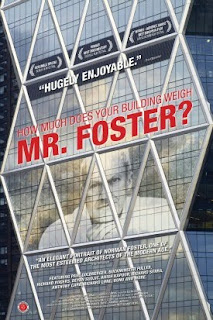 Have you guessed yet?

Well, it concerns the visions of cities such films present—they’re simply the kind of eye candy I can never say no to. You can keep your lavish costume dramas and beautiful actors and outer space vistas. Give me those shimmering towers of reflective glass, especially when they’re shot at night… The result, even in a mediocre film: I’m transported.

And not to a location so much as a state of mind—there’s a lit-match flare of beauty that, even if lasting for just a moment, stands apart from the actual narrative, and it's these tangential flights of the sublime that I happen to find both calming and exhilarating at the same time. Moreover, I’m guessing I’m not alone in my enjoyment of such architectural spectacle, given how leisurely aerial fly-overs have become nearly ubiquitous.

Sometimes these are mere establishing shots, apparently meant to convey all the bold glitz that a modern vertical city holds: invitingly jewel-like and yet, somehow, recalling stalactites (although stalagmites is more accurate)—pretty, but pointy, and therefore dangerous. Sometimes we’re treated to these moving shots during the title sequence, a kind of establishing shot on a grand scale in that it establishes the metaphysical/psychological setting of the entire film. Sometimes these are used as points of visual high drama, as in Christopher Nolan’s Dark Knight trilogy: to see a lone figure on a rooftop or impossibly high ledge is meant to convey character or theme, but I must admit that on such occasions I often care far less about those things than the privileged glimpse of the cityscape these shots represent. 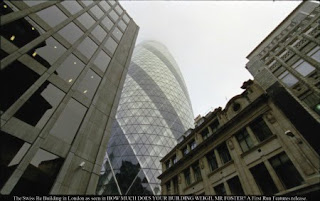 And by “privileged” I mean that we can see architecture and urban design in a way that in real life we simply can’t unless we’re window-washers or helicopter pilots. Which is one of the main reasons I find How Much Does Your Building Weigh, Mr. Foster? so glorious: we’re treated to endless, luxuriant, and perfectly lensed and scored shots of some of the most breathtaking contemporary structures in the world (all in the service of showcasing architect Norman Foster's achievements). This kind of ultimate bird’s-eye view is commonplace now, and in some big budget genre movies it’s de rigueur because, after all, how else is one to show the destruction of civilization without alien ships or monsters (or combinations thereof) sideswiping skyscrapers?

But when is the first time we saw this sort of thing? Or rather, when was the first time we saw recognizable landmarks used as a form of thrilling symbol? Wait, I'm not finished yet: I’d go so far as saying that this strategy transforms reality—actual places—into a kind of fantasy setting because the audience is positioned into a state of childlike daydreaming as in ...wow, I wonder what it would be like to fight someone up there, or hang on for dear life...?

In any case, I’d argue that it was Hitchcock who consistently pioneered this approach as a specific aesthetic. Of course the 1933 King Kong predates Hitch's monumental gestures in this respect, and lesser known efforts such as the Burgess Meredith gem The Man on the Eiffel Tower (1949) probably don't receive the attention they deserve. By the same token, international cinema in the ‘50s and ‘60s, including noir and the sort of genres I mentioned at the outset, gave us memorable skylines and a tremendously expanded sense of expressionism's focus on the emotional design of urban landscapes, but it was Hitchcock who most memorably furthered the movies' fascination with bigger-than-life locations. Think of the bridge scene in The 39 Steps or, more spectacularly, Saboteur, with its Statue of Liberty climax.

Yet in films like that one, and The Birds (from whose pre-production the above art is taken) the director alone was not responsible for the onscreen realization of the quasi-magical settings that he and his screenwriters envisioned: collaborators such as production designer Robert Boyle, the central figure among the classic film artists justifiably celebrated in Something's Gonna Live, was beyond crucial to these efforts. Yes, Hitchcock understood the power in giving the audience a privileged vantage point, but he himself was not responsible for, say, the exquisite modernist design of James Mason's mountainside retreat in North by Northwest, the one that allowed Cary Grant to be so cat-like as he climbed its exterior. (By the way, the DVD of Something's Gonna Live includes director Daniel Raim's fascinating, Oscar-nominated short, "The Man in Lincoln's Nose," which, as you can probably surmise without my help, concerns the making of NXNW.)

So if you're all blockbustered-out after this summer but not quite ready to lose the sense of wonder such films inspire, I'd queue up these two docs in a hurry. They provide slowed-down spectacle and, as a happy byproduct, enduring beauty.