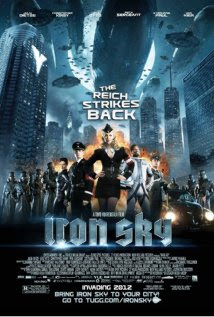 Iron Sky is an interesting film for a number of reasons. Long in production, the film was financed in part through the efforts of film fans. It’s a small budget, relatively speaking, movie that looks like they spent a huge mint on it. It’s also one of the more clever science fiction films of recent memory.

The plot of the film has America sending another expedition to the moon in 2016. It’s a shameless PR ploy by a Sarah Palin like president who is trying to milk the fact one of the astronauts is black. After landing on the moon one of the Americans walks toward a rise and is startled to see that below him is a huge mining complex…a Nazi storm trooper steps in front of him, shoots him the head and blows up the space craft, stranding the second astronaut. He is then grabbed by the storm troopers and dragged off to the complex. In the complex the Nazi’s are not only shocked that the intruder is black, but also that they have been found out. Using the intrusion as an excuse they begin to set in motion their long in the works plan of invasion of earth.

I’m not completely sure what I think of the film.

I definitely like the film, but I’m not sure to what degree. Part of the problem is that the film was very much not what I was expecting. Yes it’s Nazi invasion story, but there is something more going on. It’s a wicked send up of Republican politics (and general American nonsense) via Finland. The film riffs numerous classic films including Dr Strangelove, and in a slyly done sequence the infamous frequently parodied sequence from Downfall. But to what end? What is the film really trying to be and be about?

To be honest I'm being overly persnickety since it's rare that we get a film that is as intelligent as this and rarely do we get a science fiction film with as much going on. I suppose that on a certain level my surprise at how good and intelligent the film is made me want it to be even more so.  I shouldn't do that especially when we've ended up with a film as nicely done as Iron Sky.

Worth tracking down.
Posted by Steve Kopian at September 23, 2012