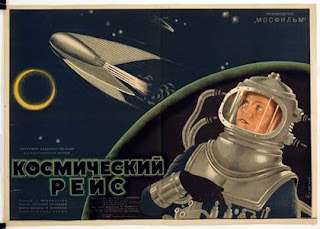 Sinister Cinema has released this lost Soviet science fiction film and we are so much better for it.

This neat little science fiction film was shot as a huge scale silent film, but was released a few years later with a synchronized score. The film brings to mind the science fiction epics of Fritz Lang like Metropolis and Woman on the Moon.

The film is set in 1946. Moscow is a huge beautiful city of the future. One of its leading scientists, Dr Sedikh decides to use one of the rockets to travel to the moon. Taking a long a young woman and a boy scout who stows away he heads off into space, landing hard on the moon. After some adventures on the moon (which are mostly realistic) the trio head home.

That may sound like spoilers, but it’s not, since that’s merely to frame hang a really cool picture. This stuff is really neat and I can only imagine how this would have played had I seen it on a big screen with its amazing shots of Moscow, the moving shots through the launch bay, not to mention the weightlessness sequences and the traversing across the lunar surface blowing my mind on my small TV. I know the sequences involved tricks, animation and models, but god damn don’t they look fantastic. This stuff is way better than the stuff they turned out in Hollywood with bigger budgets…and I mean that going all the way up to 2001.

The cries of OH COOL were heard echoing through my house late the other night.

This is a film that I want to hand off to friends to blow their minds. Sure it maybe of a period, but its really really cool.

Is it perfect? No, the story is a bit rah rah mother USSR and a tad simple, but at the same time it does carry you along.

Sinister Cinema should be congratulated for bringing it to everyone’s attention.

If you are smart you’ll get yourself a copy, along with a copy of the equally wonderful Robots of Ripley and have a scifi double feature.

Here's a super piece on the making of the film. (If it shouldn't link you to the piece when you get to the Austin Film page it takes you do a search)
Posted by Steve Kopian at September 18, 2012