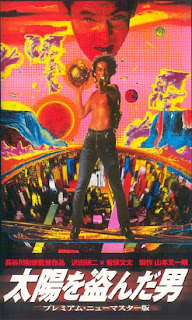 Leonard Schrader, brother of Paul, wrote this story of a high school science teacher who builds his own atomic bomb which has become legendary in some circles as a "lost" classic.

The plot has a high school teacher kidnapped with his class. In the aftermath he presses forward with his desire to build an atomic bomb. Once he's done he uses the bomb to get what he wants, first he demands that baseball games are televised to their conclusion (Which never happened when the film was made). Later, as the cops struggle to find the teacher, he demands that the Rolling Stones be allowed to play Japan (their drug problems prevented that).

As a lost classic I think its time has passed, which is not to say that the film isn't worth seeing. This is a good little film. Actually as a terrifying look at something the world maybe staring in the face right now. Its a sobering little film. The idea that someone could build a bomb in their kitchen is frightening. Of course the result of doing it will probably turn deadly for the builder, something you see here (and which was left out of the similar and clearly inferior Manhattan Project)

There are two things that are wrong with the movie. First is its over length. The film runs nearly two and a half hours and to be honest its too much. The second thing is that the film is very much of its time. This is best explained by the demands that teacher makes. The demands are the sort of thing that will cause people to look sideways at the plotting. While I understand the point is to make the demands trivial, they're too much in a time warp. The problems are best described as "movie conventions from the late 70's" which manage to date the film (I guessed the year of release just by looking at how the film was made) even though its unnerving when you really think about it.

Flaws aside this is a movie to try and find (good luck since its damn near impossible to get a hold of). Its a disturbing little movie that will leave you uneasy.
Posted by Steve Kopian at September 19, 2012