Help THE WAVE MAKER get made 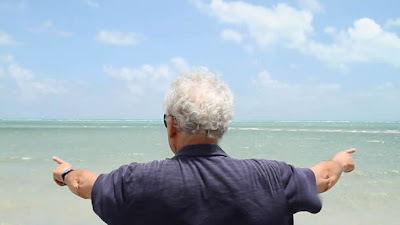 DB here- a very good friend of Unseen Films has asked us to help spread the word about a documentary called the Wave Maker. It's a film about a doctor who has a new way of looking at the world through waves. I've seen some clips to be perfectly honest  I'd like to see the film finished sinc e what is there intrigues me. There are about 10 days left in the quest for financing so I'm throwing out to you to see if it can get made.

Here's the Press release with links and such:

New York, New York, September 4, 2012 – An Indiegogo funding campaign is entering its final weeks to start post-production of filmmaker Kiira Benzing’s THE WAVE MAKER, a feature documentary about medical maverick and former Olympics physician Dr. Irving Dardik’s quest to assert a paradigm shift in our understanding of the universe and of our own bodies – by making waves. Dardik’s radical SuperWave Principle, wherein the world is made up of “waves waving within waves,” is an alternative to mainstream science and medicine currently being applied to health, cold fusion and clean energy. THE WAVE MAKER follows Dardik as he battles to convince people that his SuperWave Principle is the Theory of Everything.

“There is a lot of science and theory behind Dardik and his SuperWave Principle, but at the end of the day this film is a human story about a man who believes so deeply in his theory and has sacrificed so much for it,” said Benzing. “I genuinely appreciate Dardik’s vision of the universe, and as much as I recognize he hasn’t convinced the scientific establishment to adopt his theory, I firmly believe that his ideas are reason enough to produce this film. I really hope it will open up minds and hearts to a greater discussion about new forms of clean energy and the scientific establishment.”

Benzing and her film team have intensively captured the radical world of Dardik, from his insights on the workings of nature, to his observations of the human body under stress; to mainstream media coverage of his ideas. Benzing interviewed the naysayers, captured the stories of those living with cancer and Parkinson’s that Dardik has inspired, and documented his medical work based in cyclical exercise and circadian rhythms. Benzing also engaged with his paradigm-shifting ideas about matter and the make up of the universe, interviewing a range of prominent physicists who candidly share their views, and captured how Dardik has successfully applied his principles concerning energy expenditure and recovery time (drawn from observing top athletes) to helping diseased bodies self-heal, as well as to cold fusion, to metallurgy and to particle physics.

Funds pledged by contributors to THE WAVE MAKER’s Indiegogo campaign will go toward shooting the final scenes, equipment, hiring editors, converting footage, recording the score and animation. This campaign will receive all of the funds contributed by Wednesday, Sept. 19 at 11:59PM PT.

Contributors receive perks that range from “Waves of Gratitude” at the $12 level receiving a postcard image from film with a handwritten note from Benzing, to “The Tsunami” at the $7,000 level receiving lunch with Dardik, a visit to the set during final shoot, two tickets to the premiere in New York, a “Special Thanks” credit in film, a hot air balloon ride, a DVD of the final film, an original song by composer Daniel Halle, a silver necklace and a postcard. Also offered are credits for the Associate Producer level at $30,000, the Producer level at $50,000 and Executive Producer level at $100,000. Your name will appear in the credits of the film. These donations are tax-deductible through the film’s 501(c)3 partner, NYFA.

THE WAVE MAKER is a production of Double Eye Productions. Attached to the production are producer Kim Jackson (“Blue Caprice,” “Children of God,” and “TUB”), cinematographer Alfredo Alcantara (“The View from Bellas Luces,” “An American Promise”) and composer Daniel Halle (ASCAP).

To make a pledge to THE WAVE MAKER on Indiegogo, visit:http://www.indiegogo.com/wavemaker

ABOUT THE FILMMAKER:
As an international creator, Kiira Benzing has trained and organized projects at the Sorbonne in Paris, the National Theater Institute, and MXAT. Benzing holds a Post-Graduate degree in Classical Acting from LAMDA. In 2007 Verizon named her a “Local Hero.” In 2009 she founded Double Eye Productions. In tangent with “The Wave Maker” she created a web series “Finding The Wave” which she directed, wrote, and co-starred. She directed a short film “The Astra Approach” and is in post-production on “Matterspacetime” an experimental short. She has served as a Regional Emmy Awards Judge for the National Academy of Television Arts and Sciences.
Posted by Steve Kopian at September 10, 2012