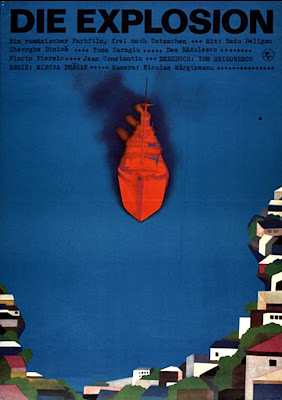 True story of a cargo ship filled with fertilizer that catches fire while anchored in a river near a Romanian city. The ship has to be moved and extinguished before the ship explodes (think the fertilizer bomb that took out the Alfred P. Murrah Federal Building a hundred fold).

Surprisingly good action drama that unfortunately has been titled to catch in on the Irwin Allen disaster film (The actual title tanslates to simply Explosion). This is not the piece of trash you think it is. This is actually a very good, far from typical (how could it be since its essentially true) story of a large number of people trying to come together to prevent their city from being leveled by an accident. Its one of those movies where you begin to wonder why, since its so good, you've never head of it before. (Oh yea it was picked up by an exploitation distributor who went for cheap bucks instead of promoting it like the good film it is)

Frankly its one of the few films I've seen in the past year that has actually made an impression on me.

(Currently available in various bargain collections such as The Grindhouse Experience- but you'll have to look since it's not one of the "big movies" usually in the collections.)
Posted by Steve Kopian at September 17, 2012