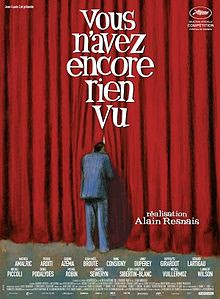 Alain Resnais who had a film in the first New York Film festival returns with on in the 50th. This digitally shot film is a love letter to the power of acting and the theater.

The film has a plethora of great French actors (all playing themselves and too many to name)being told that a playwright that they all worked with and love has died. He wants everyone come to his house for the reading of the will. His last request is that he would like all of the actors watch a video of his play Orpheus and decide if it is worth being staged once more. As they watch the film, the actors begin to recite lines and actually perform the play themselves in conjunction with what is on the TV. The walls melt away and we are watching them live the play.

Highly theatrical film, it's based on two plays and is often shot as a play including several very long single takes that show you just how good the actors are. Its a film that is very much a melding of stage and screen in a manner that I've never seen before. 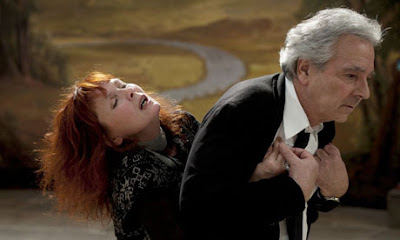 How you react to the film will be determined by to the answer two questions:

First will you by into the conceit of the actors performing the play while watching it? Will you buy into as many as three actors playing the same role as the film drifts in and out of settings? Its more than a bit strange,but if you click with it it will thrill you.

Secondly do you go crazy for great acting? I mean GREAT acting? Alain Resnais has created a love letter to all of the actors in this film, and perhaps actors in general. If you have any love for anyone in the cast you will be in heaven watching them go to town. Best of all they do it without tricks, props or cut aways. This is real movie magic.

As I said to a friend who asked about the film, your mileage will vary. I mean this in all seriousness since the reaction in the audience I was part of went from walk outs, to snoring, to orgasmic raves.

My reaction was initial a broad smile at the mixing of theater and film. It then drifted into complete bliss at watching the cast do their work... and then about the time the play gets to the end of act one the film slipped from being one of the best films of the year to being just a good one. For me the problem is that the conceit, as good as it is, can only carry the film so far. Yes the acting carries it all the way to the end, but some of the shine was off the film.

I do really like the film, but I think I admire it more than I love it. 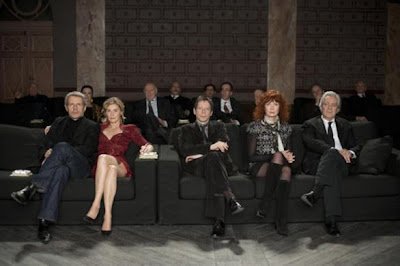